In the 2009/2010 issue of the Mozart-Jahrbuch Daniel Brandenburg reviews the late Stanley Sadie's book Mozart: The Early Years, 1756-1781. It is by itself a minor absurdity that, owing to the MJb's perpetual tardiness, a book is being reviewed six years after its publication. On p. 252 Brandenburg addresses the (supposed) deficiencies of Sadie's book as follows:

The relevant secondary literature is being covered until the year 2005, but with a few painful gaps: Dexter Edge's 2001 dissertation on Mozart's copyists has been noted by Sadie just as little as Michael Lorenz's research on the so-called Jeunehomme concerto, or the new findings on the Licenza K. 36 (33i).

Apart from the fact that a part of Brandenburg's review seems to be heavily inspired by a review of the same book by David Black, published in Music and Letters in 2007, the following question comes to mind: did Brandenburg really read Sadie's book with the necessary attention? If he had looked on p. 410 of Sadie's final opus (or had at least checked Google Books on this issue), he would have come across the following text concerning my work and the Jeunehomme/Jenamy topic: 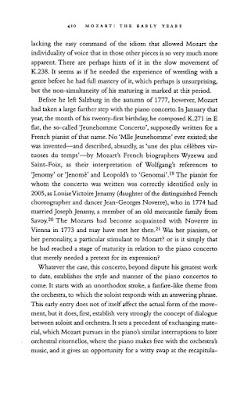 It is surprising that Brandenburg's gaffe was overlooked by the editors of the Mozart-Jahrbuch. Not only did Sadie take my research on the identity of the dedicatee of Mozart's piano concerto K. 271 into account, he also was one of the very few colleagues who actually understood how the misnomer Jeunehomme Concerto came to be: the name Jeunehomme is a total fabrication, a figment of the imagination of Wyzewa and Saint-Foix. This basic fact seemed easy to understand after I had explained it in several publications. And yet, according to a review by Ulrich Leisinger in the Mozart-Jahrbuch 2007/2008 (p. 139), the name Jeunehomme Concerto "is based on a misunderstanding". In the book Mensch Mozart!, published in 2005 by the Internationale Stiftung Mozarteum (and reperpetrated 2011 in English under the title Next to Mozart) we surprisingly are being told that the name Jeunehomme was caused by a "Verballhornung", i.e. a corruption. 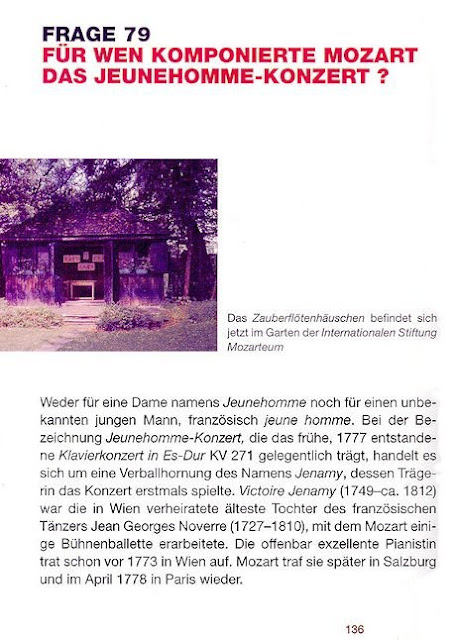 It is to be noted, by the way, that not at any price the solver of the Jeunehomme puzzle is to be named.

Posted by Michael Lorenz at 3:49 PM