As I described in a blogpost in September, Franz Anton Maulbertsch in 1777 did the painting for the main altar of St. George's Chapel in Vienna's Trattnerhof which in 1784 served as venue for Mozart's subscription concerts. The subject of the main altarpiece was chosen after the patron saint of the old chapel, originating from St. George Church in Freising. According to the "Summarische Bau=Rechnung des Edlen von Trattnerischen Freÿhofes in Wienn, in der Stadt, am Graben, N° 591. bis 596." (a complete account of the expenses for the building's construction). which the writer Hermine Cloeter had photocopied 70 years ago, Maulbertsch received a fee of  350 gulden for the painting. The other two paintings for the side altars were done by Ivo Leicher and Hubert Maurer and cost 300 and 200 gulden respectively. 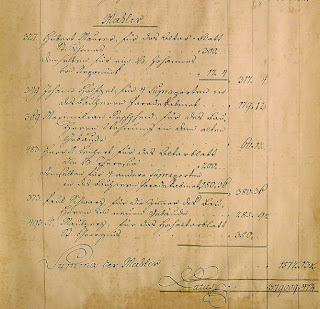 The list of expenses for the painters in the photocopy of the 1777 building account of the Trattnerhof (A-Wsa, Handschriften A 322)

It is not known what became of the three altar pieces when the church was eventually closed in 1783. The paintings are now considered lost. There is, however, a small sketch on canvas (measuring 44 x 23 cm) for the painting of St. George by Maulbertsch which was discovered in 1963 in private property in Innsbruck and purchased by the Historisches Museum der Stadt Wien (today the Wien Museum). Its similarity to the sketch of Maulbertsch's "Glorifikation Kaiser Josephs II." in the Staatsgalerie Stuttgart is proof that it was created in 1777. 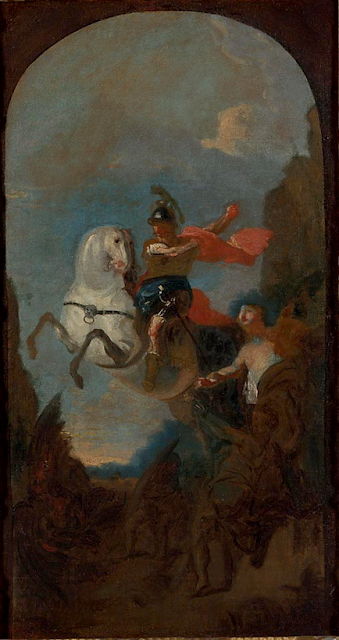 Franz Anton Maulbertsch: St. George. Sketch for the altarpiece of the chapel in the Trattnerhof (oil on canvas, Inv. Nr. 117.422, Copyright Wien Museum)


The very special design of the painting – which is more that of a soldier on a wingless Pegasus than that of a saint killing a dragon – explains as to why the Realzeitung on 25 November 1777 described it as follows:

The Arts.
Mr. Anton Maulbertsch I. & R. Academy Councilor has already made the painting for the high altar of Mr. von Trattner's house chapel. This painting shows St. George. The invention is not in the ordinary style. Sublimity of thought and audacity of streak reveal an artist who for a long time has been soaring above the mediocre.

Posted by Michael Lorenz at 8:57 AM No comments:

The reason for the recent short hiatus on this blog is the following detailed review article (in German, the language of Mozart):

This review deals with a supposedly scholarly research project concerning archival probate records of members of "Mozart's Viennese Circle". The project, which was initiated by the "Mozartgemeinde Wien" (The Vienna Mozart Society), was actually funded with 4,000(!) Euros by the City of Vienna's Department of Culture. Because the result of this enterprise is so shockingly worthless, it provides a classic example of what is gravely amiss in current Viennese Mozart research.

Posted by Michael Lorenz at 2:24 PM No comments: