An Interpretation Issue in the Slow Movement of Mozart's String Quintet K. 516

Mozart's String Quintet in G minor, K. 516 is one of the greatest pieces of chamber music ever written. Its slow movement in E flat major has been described by Alfred Einstein as "the prayer of Jesus while the apostles are asleep". On 16 March 1878, concerning the Adagio ma non troppo of this quintet, Pyotr Ilyich Tchaikovsky wrote the following to his patron Nadezhda von Mec.

In his chamber music, Mozart charms me with his purity and distinction of style and his exquisite handling of the parts. Here, too, are things which can bring tears to our eyes. I will only mention the adagio of the D [sic] minor string quintet. No one else has ever known as well how to interpret so exquisitely in music the sense of resigned and inconsolable sorrow. Every time Laub played the adagio, I had to hide in the farthest corner of the concert hall, so that others might not see how deeply this music affected me. [...] Previously I had only known the Italian Opera. It is thanks to Mozart that I have devoted my life to music. All these things have probably played a part in my exclusive love for him―and perhaps it is foolish of me to expect those who are dear to me to feel towards Mozart as I do. But if I could do anything to change your opinion―it would make me very happy. If ever you tell me that you have been touched by the adagio of the D minor quintet I shall rejoice.

The manuscript of K. 516, which today is held by the Biblioteka Jagiellońska in Kraków (Mus. ms. autogr. W. A. Mozart 516), is not completely written in Mozart's hand. Four leaves (folios 9, 10, 19 and 20) have been replaced with a copy written by Mozart's friend and pupil Franz Jakob Freystädtler, a fact that was first revealed in my article "Franz Jakob Freystädtler. Neue Forschungsergebnisse zu seiner Biographie und seinen Spuren im Werk Mozarts", in: Acta Mozartiana 44, vol. 3/4 (1997), 85-108. In the foreword of the pocket score of K. 516 (Taschenpartitur 159), which in 2001 was published by Bärenreiter, Manfred Hermann Schmid (then a subscriber of Acta Mozartiana) did not cite my article, but presented the information concerning Freystädtler's copying in the manuscript of K. 516 as if he had discovered it himself. In the NMA's critical report, published in 2003, Schmid repeated this plagiarism and clumsily tried to cover it up by only referring to the foreword of his own earlier edition of the Bärenreiter pocket score. When in 2005, in the second edition of this Bärenreiter score, he ignored my article for the third time, I submitted a formal protest to the management of Bärenreiter and requested an apology. Schmid did not even think of apologizing, and the excuse he presented was so lame that it made his behavior look even worse. He claimed that the information concerning Freystädtler's copying "had come from Ms. Ferguson of the NMA". Apart from the fact that it had been myself who in the summer of 1997, at the then NMA office in Salzburg, had told Faye Ferguson about Freystädtler's copying, Schmid hereby admitted that in his critical report, vital information concerning the autograph of K. 516 was not based on bibliographical research, but on hearsay and unverified verbal communication. Schmid also asked me to share information concerning some details he had overlooked in his report, but, for obvious reasons, I decided not to tell him anything about my research.

Freystädtler's copywork on folios 9 and 10 of the manuscript consists of bars 86-90 of the Trio of the Menuetto and bars 1-65 of the Adagio. In 1956 the original two leaves of the manuscript – according to Ernst Fritz Schmid  – were held by the Collection Pleyel in Paris. They supposedly had come from the estate of Johann Anton André who, in 1800, had received them from Constanze Mozart. It seems, however, that Schmid never was able to personally scrutinize this autograph fragment and in his article "Neue Quellen zu Werken Mozarts", Mozart-Jahrbuch 1956 (Salzburg 1957) he had to base his elaboration on a microfilm of this source whose original turned out to be unaccessible to Alan Tyson and the NMA. In the autograph of K. 516 Freystädtler's handwriting begins on folio 9r with the last five bars of the trio and ends at first leaf 11r, where at bar 66 of the Adagio Mozart's handwriting sets in again. Freystädtler inserted another six bars in the fourth movement. Mozart had already begun the Allegro on folio 12v, when he realized that on 12r there was not enough space for the ending of the Adagio introduction. Beginning at bar 33, Freystädtler by hand extended  the notation system by three bars. Next to the lowest stave he wrote "vide 0 13" and added the remaining three bars at the end of the third movement on folio 11v (i.e. the previous page). There, on the right margin of the page, he wrote "Volta sub[ito] 6/8 pag 14", referring to the beginning of the fourth movement. The foliation of the leaves copied by him is also written in Freystädtler's hand, and so are the last 16 bars of the fourth movement. The original leaf of this ending once belonged to Clifford Curzon and was sold at Christie's after 1982.

The nine bars, presenting the Adagio's second theme in B flat major (which is related to the upward figure in bars 32ff. of the first movement), are usually performed as follows: 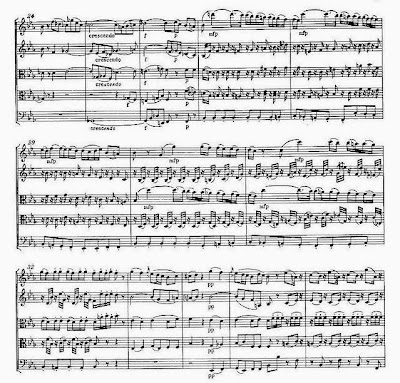 The Nash Ensemble's 2010 recording presents a similar (albeit slightly faster) interpretation of this passage:


The musical detail deserving special attention in the above passage is the upward phrase in the first violin in bar 27 which is subject of a downward sequence in the following bars and is then answered by the first viola:

There are three slurs in the first half of bar 27. The second one which connects the quarter note d''' to the following dotted sixteenth is usually played as a long note on one stroke, as if Mozart had written a quarter note with three dots. This is obviously not how Mozart wanted this passage to be executed. The second slur is a score notation, not a performance notation. The separate third slur in bar 27 means that the quarter and the dotted sixteenth d''' ought to be separated from the preceeding quarter by a stop of the bow. Every classically trained string player should realize this. Analogous to this passage, the third slur in the next bar also demands a separation of the quarter and the following dotted sixteenth. This is what Mozart had in mind when he applied a distinct third slur. 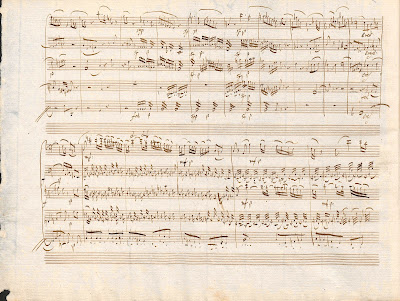 In bar 27 of the first violin part Freystädtler's copy omits the second slur which is obviously an oversight.

Bars 27-28 of the first violin part in the Adagio (fol. 9v) in the handwriting of Franz Jakob Freystädtler whose copy replaces a missing part of the autograph. According to Ernst Schmid, in 1956 the original leaves were held by the Collection Pleyel in Paris, but today they cannot be located anymore, and seem to have been stolen. In bar 28 Freystädtler erroneously wrote two e'''s and a d''' which he corrected with three small letters into c''' and b'''.

The perceptible distinction between the two notes – instead of the long maudlin single note that is usually played – should also be applied in the three analogous passages in the parts of the first violin (bars 66f. in the recapitulation) and the first viola (bars 30f. and 69f.).

Played this way, the two-bar-sequence suddenly acquires a different and more logical rhetoric whose gesture homogenously corresponds with the series of similar upward figures in bars 30 and 31. Some  editions of K. 516 actually follow this different reading. For example, Johann André's edition from 1825 (plate no. 4793). 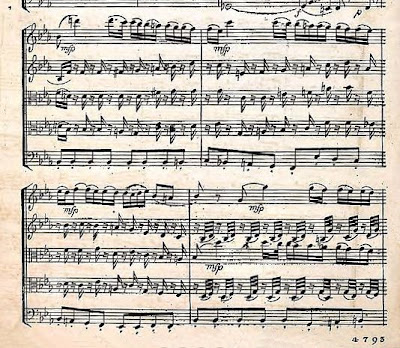 In the repeat of the second theme André's 1825 edition surprisingly has no slurs in the second upward figure in the first violin and the first viola which means that the slur was obviously considered to have no effect at all on the bowing of this phrase. 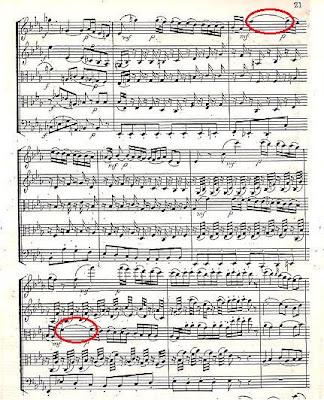 In his pocket score edition for Eulenburg (E. E. 1113), Rudolf Gerber quite naturally relied on André's edition and did not apply a second slur in bar 27 (and 66) of the first violin part (and in the analogous passages in the first viola). It seems to have been quite obvious to Gerber how this passage should be executed. 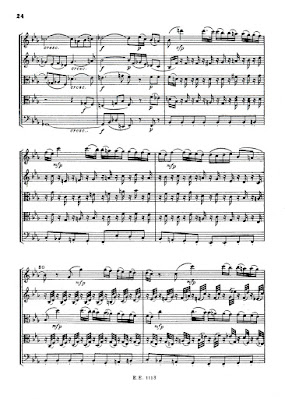 Bars 25-31 of the Adagio on p. 24 in Rudolf Gerber's edition for Eulenburg. Note that Mozart's "mfp" is turned into into "sfp".
Arthur Grumiaux, who in 1972 recorded K. 516 for Philips, realized that in bars 27 and 28 (and the analogous passages) the third note has to be audibly separated from the second one. Grumiaux (and Georges Janzer on first viola) achieved this by reducing the bow pressure after the quarter notes in bars 27 and 28 respectively.


When the original LP was released in 1973, no critic noticed this important detail. I know of only one recording of the quintet K. 516 that dares to follow the composer's true intention. In December 1991, the British chamber ensemble Hausmusik, led by violinist Monica Huggett, recorded the quintets K. 515 and 516 for EMI Classics. The CD was released in 1992.

Monica Huggett and Roger Chase, who, according to the booklet of the recording, used the Neue Mozart Ausgabe, play the aforementioned two bar phrase in the Adagio as it is printed in André's 1825 edition:


The repeat in E flat major in bars 61-71 is played analogously. 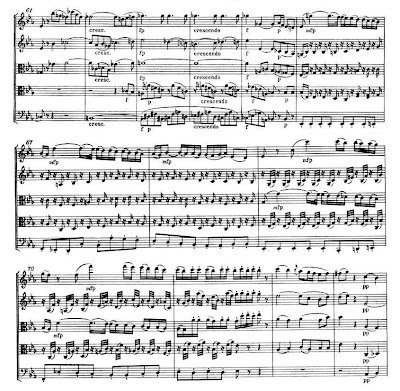 
Hausmusik's complete recording of K. 516 is available here on YouTube (the ridiculous "Mozart portrait" must be ignored). In spite of slight intonation problems, Hausmusik's performance of the third movement of K. 516 fundamentally changes the quality of a classic "beautiful Mozart passage". The correct interpretation of the second theme in the Adagio is, in my opinion, so much better and more logical that it completely changes the listening experience and makes the traditional version completely unacceptable.

I have recently become aware of the recording of K. 516 by the Budapest String Quartet with Walter Trampler on second viola which was released in 1957 on the Columbia Masterworks Records label (ML 5192). The musicians performing in this recording were Joseph Roisman, Alexander Schneider, Boris Kroyt, Mischa Schneider and Walter Trampler. 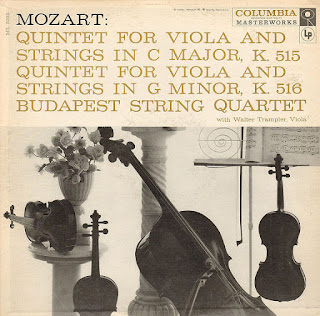 This recording is an early document of the third movement of K. 516 being performed as it is written in the score: with the third note in bars 27 and 28 (and the analogous passages) audibly separated from the second one.

What is surprising is not that these legendary chamber musicians instinctively understood the implied meaning of the written musical text. It is the fact that their interpretation was not taken as a model by musicians of later generations.