Martines, Maron and a Latin Inscription

On 27 May 1773 the composer Marianna Martines was appointed member of the renowned Accademia filarmonica of Bologna. Following Padre Martini's favorable judgment of her work and being aware of Pietro Metastasio's interest in her musical career, a committee of eighteen members voted unanimously to grant Martines the title Accademia filarmonica Onorata. A diploma of honor on parchment was prepared explicitly for her to be dispatched to Vienna and a report of the meeting was published on 13 July 1773 in the Gazetta di Bologna. In the 108 years of the academy's existence since 1666, Martines was the first woman composer to receive this honor. Only five more women would earn this distinction by the end of the eighteenth century. Soon after she had received the exquisite academic accolades, Martines must have commissioned a portrait of herself to be painted by the renowned artist Anton von Maron, who in 1772 had returned to Vienna after having spent seventeen years in Rome. 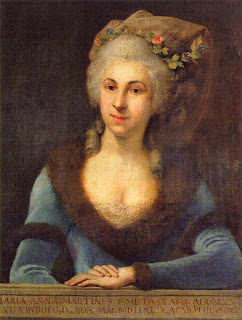 The inscription on this painting, which today is held by the Wien Museum (Inv. No. 158.809), was first published in 1995 by my friend, the late Irving Godt, as follows.

When Melanie Unseld was working on her book Mozarts Frauen. Begegnungen in Musik und Liebe and spent time in Vienna "to make original sources the basis of her book" (as she proudly claimed in a press interview), she visited the Wien Museum's deposit to take a look at the Martines portrait. Her "on-site inspection in Vienna" (as she described this excursion) yielded rather modest results: although her book contains a nice color picture of Maron's painting on which the Latin inscription is perfectly legible, Unseld simply copied the flawed transcription from Godt's article "Marianna in Italy" in the 1995 Journal of Musicology. In the review of Unseld's book which in 2007 I wrote for the Mozart-Jahrbuch 2007/2008 (and which was published only in November 2011), I pointed out this mistake and noted that Unseld should have copied the inscription from the painting itself instead of using Irving Godt's old transcription. It turned out that Unseld was able to even go one better. In the February 2011 issue of the Schweizer Musikzeitung she published a short article about Martines in which she not only repeated Godt's misreading of the Latin text, but also presented a new translation in which she turned the poet Pietro Metastasio into a "Padre Metastasio".

When in February 2012 Sony Music published the CD Marianna Martines: Il Primo Amore with cantatas and concertos by Martines, in the booklet of this CD Unseld not only repeated her "Padre Metastasio" gem, but also  redated Maron's portrait to the year 1780. 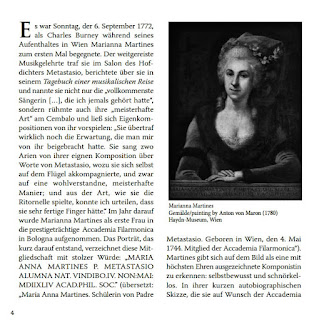 We can safely presume that neither Irving Godt nor Melanie Unseld ever studied Latin. Otherwise they would have realized that the first transcription and its translation were already flawed. The missing genitive in "Metastasio alumna" is a gross mistake, and the translation of the date with "4th day of May" reveal a certain unfamiliarity with the Roman calendar. Maron's Latin inscription on the Martines portrait reads as follows.

Maria Anna Martines. Pupil of Pietro Metastasio
Born in Vienna, on the fourth day before the Nones of May 1744, member of the Philharmonic Academy.


On 23 January 1774, together with her four brothers Joseph, Dionys, Johann Baptist, and Karl Borromäus, and her sister Antonia, Marianna Martines was ennobled by Maria Theresia. In the patent of nobility the coat of arms of the Martines family is described as follows.


Namely an upright blue escutcheon with an erect golden cadeuceus, across which in the the middle a black fess is drawn, which again is overlaid with a broad silver band. On the shield, rest two open knights' jousting helms facing each other, with pendent decorative mantling, crowned with golden coronets artfully intertwined in gold and blue on the right, and in black and silver on the left. Above the helm in the front, between two black eagle wings facing each other, the front part of a silver greyhound, looking to the left, stands displayed with a red collar bordered in gold and furnished with a golden ring; on the back helm, facing left, stands a simple golden eagle with outspread wings, open beak, and outstretched claws. 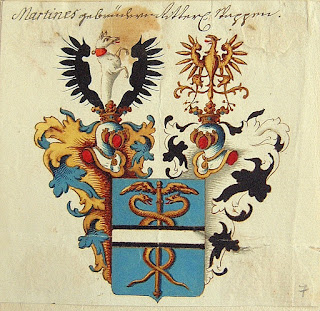 Seal impressions of the Martines coat of arms appear in the 1775 probate file of Theresia Martines where a list of assets bears the signatures of four of her children. The custodian of the I. & R. Court library, Joseph von Martines signed on behalf of his absent brothers Dionys and Johann Baptist von Martines. 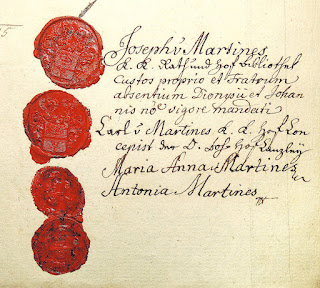 The seals and signatures of Joseph, Carl, Maria Anna, and Antonia von Martines in her mother's Sperrs-Relation (A-Whh, OMaA, 21-4)

And since he somehow caused the whole confusion, Anton von Maron gets the final word with his signature and seal from 1764.