On 26 November 1760, in the Eligius Chapel of Vienna's St. Stephen's Cathedral, Joseph Haydn married Maria Anna Keller. The entry in the marriage records of the parish concerning Haydn's wedding was first published in 1875 by Carl Ferdinand Pohl in his book Joseph Haydn. Since Pohl's transcription contains several inaccuracies which have found their way into the Haydn literature – with Robbins Landon's translation of Pohl's edition in Haydn: The Early Years (London: Thames and Hudson, 1980, 248) being particularly flawed – I hereby present the very first correct transcription and translation of this document.

Robbins Landon certainly never saw Haydn's original marriage entry, because in his Chronicle 1757-60 (249), in the chapter about Haydn's marriage, Robbins Landon writes: "The fact that Haydn signs himself[sic!] boldly on the register of St. Stephen's (acting this time, as the local parish church as 'Music-Director'[sic!] at titl. [Herrn] Count v. Morzin', must mean that he was still in Morzin's service." Needless to say that Haydn did not sign himself in the marriage register. And "Music-Director" is not even the word that appears in the records. Robbins Landon's and Robert Franz Müller's musings (which were based on an obvious misunderstanding by Dies), as to whether Haydn kept his marriage secret from Count Morzin, are of course moot. Like every member of a nobleman's private staff who wanted to get married, Haydn had to present a written declaration of consent from his employer. 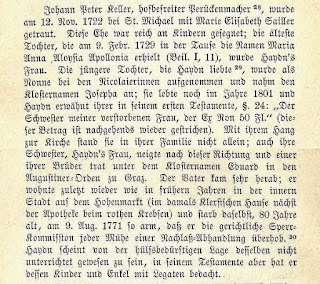 Pohl's choice for the identity of Haydn's wife was basically arbitrary. He certainly did not conduct a systematic search in the Vienna church records. I suspect that he did not even do the research himself and got the information concerning the two sources from the parish archive of St. Stephen's, that he published, from somebody else. Had Pohl personally consulted the Cathedral's records, he would certainly have realized that Maria Anna Aloysia Apollonia Keller was not her parents' first daughter. Anybody who would have personally checked Johann Peter Keller's 1722 marriage entry (A-Wstm, Tom. 4, 345) in the records of St. Michael's, would immediately have looked into the following baptismal registers of this same parish. This is the standard procedure to find the earliest children of a marriage. Pohl did no such thing. He also was not aware of the basic fact that a child's "Rufname", the first name, by which it is addressed, cannot be determined from a baptismal entry, but only from a later marriage entry, or an entry in the death records. Considering the high birth rates in the early eighteenth century, doing research on a Viennese family from this time by checking only the baptismal records, but ignoring the death records, is – from a scholarly point of view – an almost pointless enterprise.

The daughter of Johann Peter Keller whom Haydn really married was Maria Anna Theresia Keller who was born on 25 September 1730, the seventh child of her parents, in the "Fernerisches Haus" on the Hoher Markt (today Hoher Markt 4). As Carpani rightly noted in 1812, her "Rufname" was to be Anna. 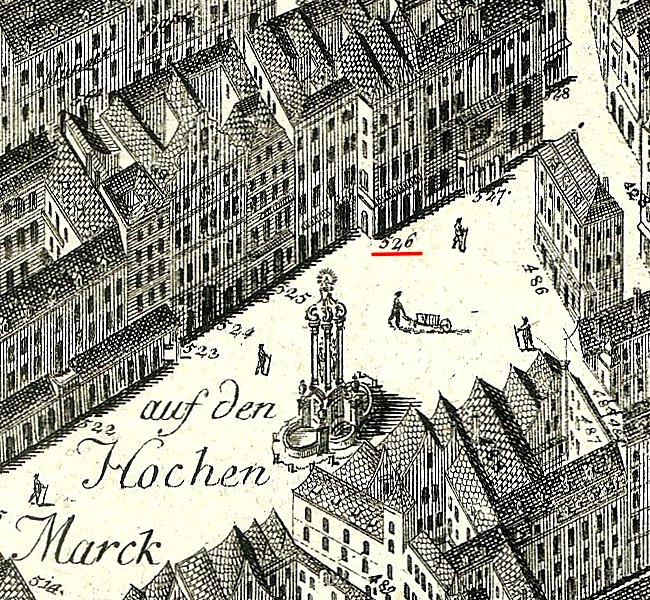 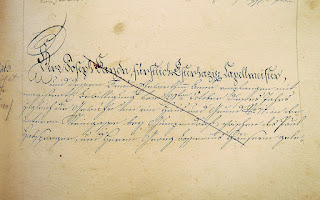 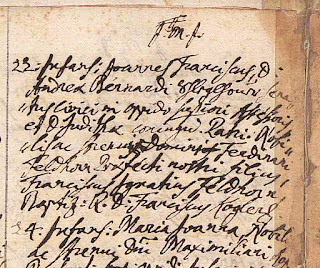 The entry concerning Johann Franz Schlegelhofer's baptism on 22 June 1700 in the church of the Herzogenburg Monastery (Herzogenburg 01,2,3/03, p. 4). The three letters above the entry mean "Jesus Maria Joseph". Between 22 December 1685 and 10 June 1708, Schlegelhofer's parents produced at least 11 children who were all born in Herzogenburg.

On 3 September 1730, Schlegelhofer, who at that time was living in the building of the court chancellery, married Anna Maria Glass, née Klazenegg (Schotten, Tom. 24, fol. 211r), the widow of Franz Glass, a doorman in the service of Empress Maria Amalia. Glass and Anna Maria Klazenegg had married on 25 February 1716 (Schotten, Tom. 21, fol. 239v), and between 1720 and 1727, had six children all of whom were still alive at the time of their father's death in 1729.

Johann Franz Schlegelhofer died in the early hours of 28 October 1755 (Wiener Zeitung, 29 October 1755) of "Blutbrechen" (blood vomitting) in the "Bischof-Hauß am Haÿdenschuß". This building, where in 1788 Lorenzo Da Ponte was to reside, has already been dealt with on this blog. 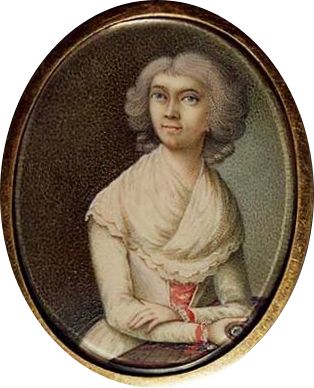