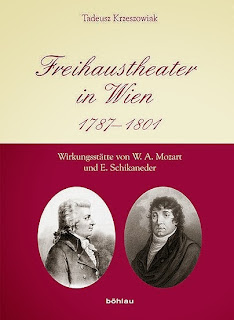 Krzeszowiak presents himself as a pioneer, offering new sources to the reader, yet he seems unaware of nearly all previous scholarly research on Vienna's Freihaus and the Wiednertheater. He has obviously established his own parallel universe of make-believe Mozart scholarship where he pretends to be a pioneer of archival research. With the exception of a few theater posters (given with erroneous shelfmarks), there are actually no "photos and documents presented here for the first time" as advertised in the blurb. It has been decades since Otto Erich Deutsch and Else Spiesberger published the Linz archival material on the Freihaus, and the plans in the Lower Austrian Federal Archive in St. Pölten were the subject of my presentation in 2006 in Brussels, and my 2008 article "Neue Forschungsergebnisse zum Theater auf der Wieden und Emanuel Schikaneder" in the journal Wiener Geschichtsblätter. Ignaz von Seyfried's "Journal des Theaters an der Wien", parts of which Krzeszowiak presents in transcription (rife with amusing errors and Seyfried's signature presented as "illegible"), has been available complete since 1997 in Stephan Punderlitschek's transcription, and Anke Sonnek has also transcribed much of the manuscript in her 1999 book about Emanuel Schikaneder. Had Krzeszowiak been aware of David J. Buch's publications over the last twelve years on this theater's repertory, he would have been able to give correct dates and titles for pieces. For example Emanuel Schikaneder's Der wohltätige Derwisch was already in the repertory of the Theater auf der Wieden in 1791 and was not first performed in 1793, as Kreszowiak claims. He would also have been aware of the surviving musical and textual sources from the theater that Buch has discussed in numerous publications.

Krzeszowiak's citations from eighteenth-century periodicals and cited archival shelfmarks are taken almost exclusively from older German-language secondary literature (particularly the writings of Anton Bauer and Carl Glossy). Because he uses shelfmarks that are outdated by decades (such as "Archiv des Landes Niederösterreich, Wiener Stadthauptmannschaft, Akt Nr. 161 ex 1800 ƒƒ."), sometimes from archives that were disbanded right after WWII ("Archiv der Ministeriums für Inneres und Justiz"), and because he faithfully repeats the errors in the secondary literature, it is obvious that he never personally examined the majority of these documents himself. Concerning the Freemasonry documents in the "Vertrauliches Archiv" in the Haus-, Hof- und Staatsarchiv, Krzeszowiak diligently copies all the shelfmarks from the secondary literature and presents them as if this material had not been published elsewhere decades ago, thereby staging himself as pioneering researcher. Moreover, there is not a single transcription in this book without mistakes. No archival source is cited with the correct shelfmark. Countless words, easily recognized by readers familiar with contemporary Kurrentschrift, are merely indicated as "illegible". The fact that the author has only a marginal knowledge of the Mozart literature, results in a continuous stream of absurdities. For example, Krzeszowiak claims to provide the "first" transcription of Mozart's marriage certificate. In actuality, this document has been transcribed and published decades ago, and in a far more accurate and complete manner than Krzeszowiak's botched edition. Krzeszowiak reproduces the plans of the Freihaus in black and white, failing to understand the significance of the colors that separate actual structures from proposed building projects.

Roughly half way into the book, the author suddenly changes to a topic that has nothing to do with the title of the book: "Mozart 1756-1791. Aspects of Biography." Here too we encounter a jumble of inaccuracies and errors that have long since been corrected by Mozart scholarship. The nonsense compiled in this book never fails to amaze. We learn that Schikaneder used "live[!] lions, monkeys and snakes" in the performance of "Die Zauberflöte"; that "Gluck himself chose Mozart as his successor as court musician"; that Mozart received "a fee of 900 gulden" for Così fan tutte (only 450 gulden are documented); that Franz de Paula Hofer "was a violinist in Schikaneder's troupe" (he was a court musician) and that Schikaneder "was expelled from the freemasons, because in the 'Zauberflöte' he had betrayed one of their secret initiation rituals". Josepha Hofer's 1790 employment contract with Schikaneder is copied right out of Rudolph Angermüller's deeply flawed book MOZART 1485/86 bis 2003 (Tutzing: Schneider, 2004). But Krzeszowiak did not realize that Angermüller's version of this document is a mere torso (presenting only three of nine paragraphs), because Angermüller just copied the text from two pictures which were published on the internet, when in 2006 the contract was auctioned by the firm Otto Haas. Just like Angermüller, Krzeszowiak is unaware of the fact that Emil Karl Blümml already published this document in its entirety in 1923, when it still belonged to Franz Josef Böhm.

Krzeszowiak presents us with a "Constanze van Nissen", a "Franz Xaver Mozart" (all through his life his first name was Wolfgang), a "National-Hoftheter", a month by the name of "rber" (recte "7ber", i.e. September), a monthly rent of 130[!] gulden for one of Mozart's apartments, Joseph von Bauernfeld as "Unternehmer des Wiedner Hof und Gerichtsadvokat. Theaters", and syphilis as cause of Franz Xaver Süßmayr's death. The author claims that Mozart was buried in a mass grave, together with other corpses; that a painting of a supposedly Viennese lodge includes portraits of Mozart and Schikaneder and that a photograph of Max Keller's family shows Constanze Mozart. The first issue has been settled recently in a post of mine on this blog. The erroneous assumption that the painting of a lodge in the Wien Museum actually shows Mozart was caused by the late H. C. Robbins Landon, who, a freemason himself, failed to realize that the two persons on the far right of the picture both wear a golden angle on their chest. In my aforesaid article about Schikaneder and the Theater auf der Wieden, I pointed out that these angles are the exclusive insignia of the lodge's chairman and the first supervisor which precludes the identification of the two individuals as Mozart and Schikaneder. 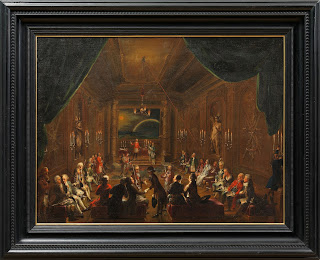 Painting of the interior of a masonic lodge (Wien Museum I.N. 47927)

The notorious "photograph of Constanze Mozart" issue was caused in 2006 by a hallucination of an Altötting archivist who was so heavily afflicted by the "2006 Mozart anniversary craze" that he dug up a carton curio which had already been published by Erich Herrmann Müller von Asow in 1958 in the journal Österreichische Musikzeitschrift. But of course, neither naivete nor gullibility of journalists can alter the well-documented history of photography. Owing to the lack of doublet achromatic lenses, which were not yet widely available in 1840, there are no short-exposure open air group portraits from that time. The earliest daylight photographs of this kind are Carl Ferdinand Stelzner's group portraits of the "Hamburger Künstlerverein", taken on 6 May 1843 (one year after Constanze Mozart's death), at the summer inn on the so-called Caffamacherreihe in Hamburg. 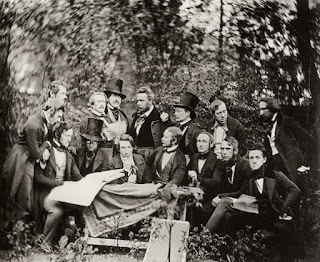 We encounter such faulty readings as "Jacob …. CugHauptmann" (actually Jacob Edler Herr v Schickh Kreishauptmann), "Johann Thams (actually Thomas) von Trattner" as godfather of Mozart's son, as well as the note that "Herr Mayer" in 1800 performed the role of "Anraux" (this singer's name was Meier and the role was Aeneas). Mistakes also occur when Krzeszowiak reads printed sources, for example, he was not even able to correctly transcribe the Zettel of the "Zauberflöte" premiere (turning Mozart from a "Kammerkompositeur" into a "Hofkompositeur"). Benedikt Schack's opera "Die  geplagten Ehemänner" ends up as "Die geplanten Ehemänner", the comedy "Die schlaue Nanette" becomes "Die schöne Nanette", and Neukäufler's "Der Rothgärbers Sohn" repeatedly appears as "Der Rothgräbers Sohn" (this is not a typo, the author simply does not know better). One finds numerous incorrect proper names such as "Karl Gorifchet's Buchhandlung" (recte Gorischek's), "Oskar Teuber" (recte Teubner), "Reghini" (recte Righini) and "Händl" (recte Händel), and flawed original citations being disingenuously presented as if they are complete and accurate (for example the quotes from Blümml's and Gugitz's book Alt-Wiener Thespiskarren on p. 72 and Friedl's Vertraute Briefe on p. 169). How Josepha Hofer, "ein Mädchen von 8 Grafen[!] in 1799 performed "im[!] Conzert auf dem Pianoforte" at a "muskialische[!] Akademie" has to be seen to be believed – and keep in mind that these goofs define the general quality of the whole book.

The book lacks a bibliography and a list of primary sources; instead, the end of the volume contains a series of advertisements by sponsors. More than 100 typos are proof that the book was never subjected to a thorough proofreading and editing process. But even with such corrections, one would be left wondering why the author did not consult experts in the field in order to produce a credible and more focused study. 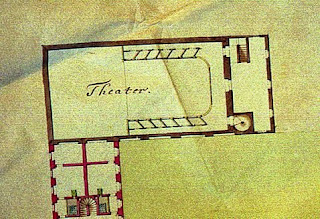