Mozart's second child Carl Thomas was born on 21 September 1784 in the Trattnerhof on the Graben. 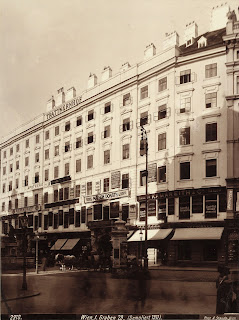 The entry concerning the baptism, published for the first time in 1919 by Emil Karl Blümml (and in 1961 only referred to by Otto Erich Deutsch), is based on the following document in the registers of the parish of St. Peter's Church in Vienna.

Blümml's transcription of this document reads as follows.

Blümml's transcription contains the following four mistakes:
Blümml was also unaware of the fact that the document he copied was nothing but a later fair copy of the original 1784 entry. Only a small number of the old original baptismal registers of St. Peter's survive. Mozart scholarship was unaware of their existence until, in 2006, I realized their significance and published the original entry concerning Theresia Mozart's baptism for the first time in my 2009 article "Mozart's Apartment on the Alsergrund" (and again in 2013 on this blog). The original 1784 entry concerning Carl Thomas Mozart's baptism looks as follows: 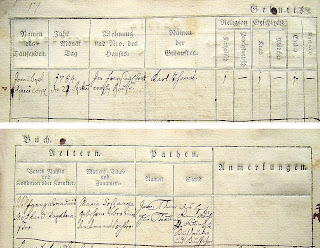 This document shows that the mother's wrong family name "Ueber" in the clean copy, published by Blümml, was caused by a sloppy "W" in the original entry from 1784. The midwife – whose name is not given in the records – was most likely Franziska Sidler (1720-1797). She had already helped deliver Mozart's first son in 1783. The Trattnerhof was located in her district. 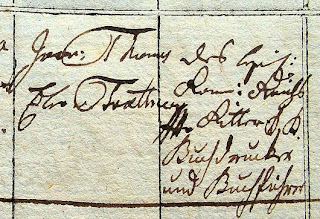 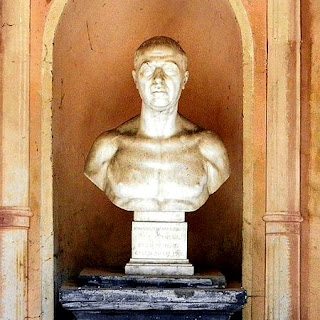 Trattner's bust in the church in Wienerherberg which is a work of Johann Martin Fischer. The Trattner family mausoleum is located behind the Wienerherberg parish church.


Until now, nobody has ever asked the not so far-fetched question why Mozart's second son was named Carl. Why did Mozart not try to make up for his faux pas one year earlier, when he disappointed his father by naming his firstborn "Raimund Leopold", instead of "Leopold Raimund"? "Leopold Thomas" would have been quite an obvious choice of names for the second child. Was Carl Mozart's eponym already Mozart's friend Carl Prince Lichnowsky whose mother Maria Carolina, Princess Lichnowsky (1741–1800) was among the subscribers of Mozart's Trattnerhof concerts?

Posted by Michael Lorenz at 4:19 PM