It is sometimes intriguing to figure out how certain errors find their way into biographical research. According to the standard literature on Viennese instrument makers the piano builder Mathias Jakesch was born "ca. 1783 in Loschin (Moravia)":

The beginning of the entry about Mathias Jakesch on p. 228 of Rudolf Hopfner's book Wiener Musikinstrumentenmacher 1766 – 1900 (Tutzing: Schneider, 1999)

"Loschin in Moravia" as Jakesch's place of birth is given on several web sites. In 2001 the Ira F. Brilliant Center for Beethoven Studies at San José State University acquired an original Jakesch piano from 1827 which is presented on the Center's homepage as follows. 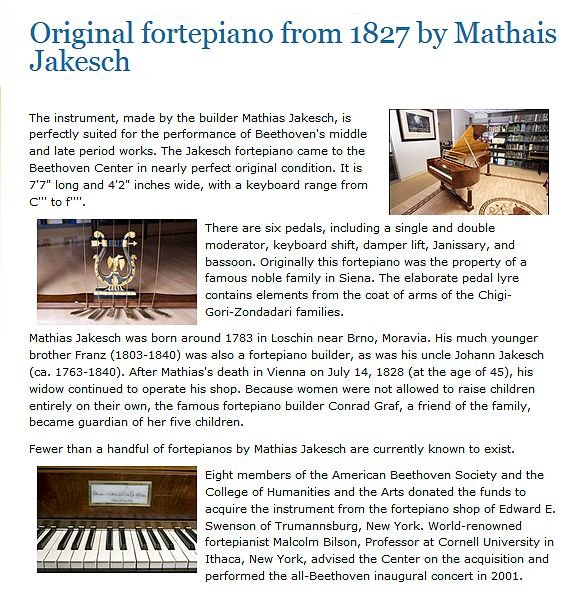 The Ira F. Brilliant Center's presentation of Mathias Jakesch's 1827 piano, giving "Loschin near Brno" as Jakesch's place of birth. Contrary to the information on this page Jakesch's uncle Johann was not born in 1763, but in 1755. The typo "Mathais" in the headline is symptomatic. 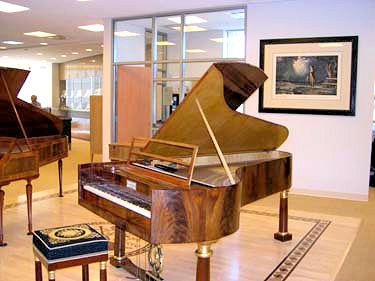 On the American Beethoven Society's website we read: "A piano and organ maker, Mathias Jakesch was born around 1783 in Loschin near Brno, Moravia. He died 14 July 1828 in Vienna at age 45. He lived in Vienna auf der Wieden, Kirchengasse 182." There is one small problem with Mathias Jakesch's supposed place of birth: a Moravian village named "Loschin" does not exist.

When Helga Haupt tried to identify Mathias Jakesch's place of birth she checked the death register of the Vienna City Council and found the following entry:

Jackesch Mr. Mathias, civil maker of musical instruments, born in Losch in Moravia in the house of Mr. Steiner No. 182 on the Old Wieden of pulmonary consumption, aged 45 years. Konstantin [coroner]

This document shows that the mysterious village "Loschin" in Moravia is what Helga Haupt made of "Lösch in Mähren" (today Líšeň which in 1919 became a district of Brno).

The flawed "Loschin" information has been corrected by Rudolf Hopfner in his article on the  Jakesch family in the Österreichisches Musiklexikon. But this encyclopedia is only available in few libraries outside of Austria and it is rarely taken into account by musicologists, because of the huge number of errors it contains.

We do not know if Johann was a brother of Mathias's father, the street custodian Franz Jakesch who 30 years later lived about 15 kilometers away in Latein near Brno. The alleged family relation was put into existence by Franz Gräffer in vol. 3 of his 1845 book Kleine Wiener-Memoiren, where he describes how the samaritan Johann Jakesch adopted his brother's nine children: 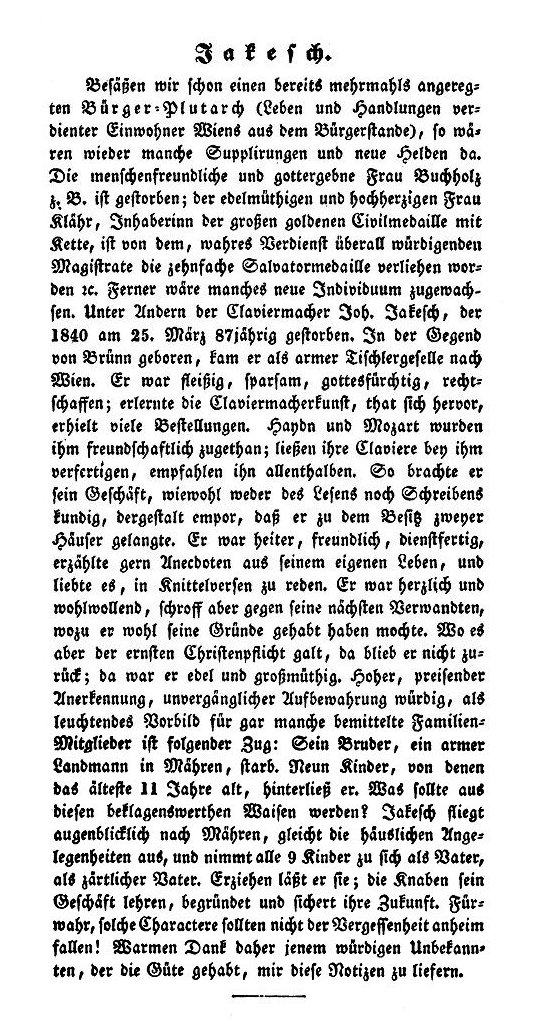 Franz Gräffer's description of Johann Jakesch's exemplary behavior. The "gottergebene Frau Buchholz" ("the pious Mrs. Buchholz") referred to at the beginning is Anna Buchholz who in 1809 inherited 100 gulden from Joseph Haydn.

Jakesch.
If we already had the Bürger-Plutarch, whose creation has been suggested many times (the life and deeds of deserved Viennese citizens from the middle class), some substitutes and a number of new heroes would be in store. [...] Many new individuals could be added. Among them the piano maker Johann Jakesch, who died on 25 March 1840 at the age of eighty-seven. Born in the area of Brno, he came to Vienna as a poor apprentice carpenter. He was industrious, frugal, God-fearing and righteous; he learned the art of piano making, excelled in his craft, received many orders. Haydn and Mozart became his friends; had their pianos made by him, recommended him everywhere. In spite of being illiterate, he advanced his business in such a way that he came into the possession of two houses. He was cheerful, friendly, obliging, liked to tell stories from his life, and loved to speak in doggerel. He was cordial and sympathetic, but harsh against his closest relatives, for which he might well have had his reasons. As far as his serious duty as a Christian was concerned, he did not fail and showed himself to be noble and generous. Worthy of praiseful recognition and everlasting memory, as a shining example for many well-off family members is the following feature: His brother, a poor fellow, died in Moravia. He left nine children, of whom the oldest was eleven years old. What should become of these deplorable orphans? Instantly Jakesch hurries to Moravia, settles the domestic affairs, and takes all nine children with him as a father, as a tender father. He has them educated; he teaches the boys his craft; establishes and secures their future. Indeed, such characters should not fall into oblivion!

What Gräffer of course could not know was the fact that seven months after the death of his first wife Anna in 1811 Johann Jakesch had made the mistake of marrying again. His second wife was the widow Elisabeth Fingerl, a sister of the capellmeister Johann Georg Lickl. The marriage turned out to be a disaster and when Jakesch's second wife died on 24 March 1815, the couple had already separated and was on the brink of getting divorced. The rift between them was so deep that the widower refused to sign  his deceased wife's probate papers.

As far as Johann Jakesch's adoption of his brother's nine children is concerned, part of Franz Gräffer's story is corroborated by the sources. Mathias Jakesch's younger siblings were orphaned in 1809, when their parents died within five days. Catharina Jakesch died on 6 October 1809 of exhaustion, her husband Franz died on 11 October 1809 of dropsy.

A conscription sheet of Johann Jakesch's house Wieden No. 78 (today Wohllebengasse 15) from between 1805 and 1811 lists several of Johann Jakesch's adopted relatives. At the top left Johann Jakesch is given as owner of the house. Then follows Jakesch ("v Malostowitz in Mähren") and the names of his two wives (the second one described as "getrennt gestorben"), his only son Georg ("Instrumentenmacher v Alstergasse, verh., komt vor, mittl[erer] Schwächling"). Mathias Jakesch is listed twice, once as "Ziehsohn", "Bruders Sohn" and "Instrumentenmachergesell von Frauenfels in Mähren", once as "Bruders Sohn Instrumentenmachergesell mittl. v Lösch b Brünn, angenommen [adopted]"). Then follow Ignaz ("Angenommen"), Anna Franziska ("Ziehtochter"), Martin ("Anverwandter in d Lehr bey Militär gestorb[en] in Italien"), Franz ("d[etto] in d Lehr"), Apolonia ("in d Kost") and what seems to be a Veronica Jakesch. The years of birth of some children prove that Gräffer's information concerning the age of the youngest child was correct. 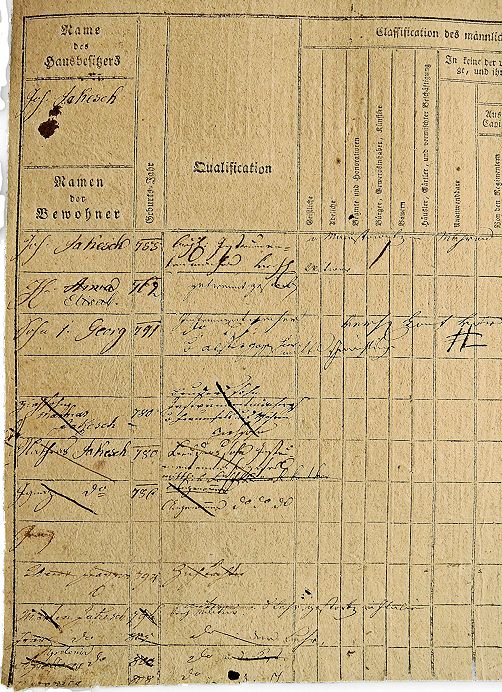 The family of Johann Jakesch and his adopted children on a conscription sheet of the house Wieden No. 78. The children's names are crossed out because ar some time they moved out from their uncle's house. (A-Ws, Konskriptionsamt, KB Wieden 78/1r)

After having received the City's official permission to work as a piano builder, Mathias Jakesch on 21 October 1811 married Walburga Kreb, the daughter of a state official from Burgau in Bavaria. His marriage contract shows that he was unable to even write his name. Jakesch signed with three Xs and his name was written by Karl Klose "als ersuchter Namensunterschreiber des H[errn] Mathias Jackesch und Zeuge". 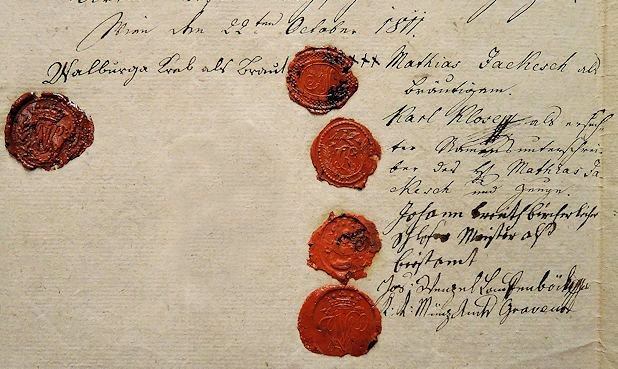 Between 1812 and 1826 Mathias Jakesch and his wife had seven children of whom five were still alive at the time of Jakesch's death on 14 July 1828. Conrad Graf became the guardian of those children and Walburga Jakesch continued to run her husband's business until 1839. But a detailed biography of Mathias Jakesch is not the main topic of this blogpost.