On 26 June 1770, Mozart was awarded the Order of the Golden Spur by pope Pope Clement XIV. By receiving this honor, Mozart was appointed Comes palatinus Lateranus, i.e. Papal Count Palatine who in his home country had the right to use the predicate of nobility and to claim the social status that was connected with knighthood. Being a recipient of the first grade of the Papal Order, Mozart had more right to consider himself a nobleman than his colleague Gluck who had only received the second grade of that order. During his later life, Mozart never claimed his status as nobleman. A trace of his title only appears in his signature which he graced with the syllable "Ca" for the Italian word "Cavaliere". 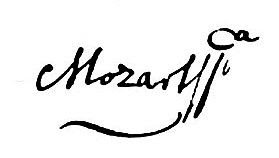 In my article "Mozart's Apartment on the Alsergrund", which I published in June 2009, I pointed out that there are a number of primary sources from Mozart's Viennese years where the composer appears as "von Mozart", suggesting that he either was addressed with a predicate of nobility or even claimed his status as nobleman himself. The following six documents (all of which I listed back in 2009) bear Mozart's name with the predicate "von".

A transcription of this document (which is not transcribed and only referred to in Deutsch's, Dokumente) was first published in 1919 by Emil Karl Blümml and copied from Blümml by Walter Hummel for his 1956 book W. A. Mozarts Söhne. Since Blümml's transcription is flawed and incomplete (he for instance ignored the "Maria" in the mother's name), the complete entry is published here for the first time.

As is well known, Mozart's first child died on 19 August 1783 at the home of a foster mother while its parents were still in Salzburg. On the occasion of the inspection of the child's body by the municipal coroner, it turned out that the foster mother at Oberneustift No. 250 did not know Mozart's first name. Thus the entry in the Totenbeschauprotokoll (which was first published in its entirety by Dexter Edge in 2001) begins with "Mozart H[errn] N: Musiko, sein Kind Reimund". Because the entry in the parish records of St. Ulrich concerning the child's burial is a special case and because (to nobody's surprise) it has never been published completely, I address it in this post. Like in the official death records, Mozart's first name is missing, but has been added at some later time with blue crayon with the abbreviated attribute "von".

It is difficult to determine when the first name "Wolfgang v" was added. As a matter of fact the "von"  speaks against its having been written in the late 19th century when the public interest in Mozart's family started to grow. Nobody at that time considered Mozart a nobleman who deserved to have his name completed with a "Wolfgang von". In his incomplete transcription Blümml simply ignored the addition which does not mean that it had not been written yet. Blümml seems to have considered it irrelevant.

On 8 June 2009, I published the following entry in the tax register of the Vienna magistrate concerning the spacious apartment that Mozart rented in 1788 in the house Alsergrund No. 135.

Here is a picture of the same entry on folio 218 of the tax register (A-Wsa, Steueramt B34/27) with the printed headers on top and the additional entry in the column on the right page. 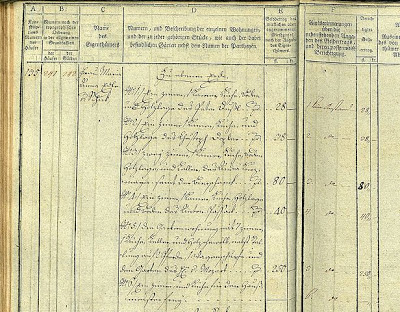 Of course, Mozart's appearance as "Herr von Mozart" could be a gesture of courtesy by the revenue officer who was careful not to deny a well deserved status to an obviously well off tenant of a spacious abode. The documents related to the death of Mozart's daughter Theresia, who died in this apartment in summer of 1788, also show Mozart as being addressed with the predicate of nobility

The sources concerning Theresia Mozart's death and burial in 1788

Mozart's first daughter Theresia died on 29 June 1788 at Alsergrund No. 135. The official (never completely published) entry in the death register of the Vienna magistrate reads as follows.

The entry in the death register (Sterbebuch Tom. 1, fol. 108) of the Servite Church in the Rossau concerning the child's burial on the following day has never been published correctly. It reads as follows.

The name of Ludwig Birnbaum in the death register is a telling example of Emil Karl Blümml's dubious expertise in transcribing eighteenth-century handwritten sources. In his 1919 article "Mozarts Kinder", he managed to mistranscribe the priest's name as "Ludovicus Maria Grabner".

In his article "Wieviel Kinder hatte Mozart" (Neues Wiener Tagblatt, 2 November 1923, p. 8) Otto Erich Deutsch only had high praise for Blümml's work. In my opinion, Deutsch was in no position to judge it.

Mozart's fifth child Anna Mozart died shortly after her birth on 16 November 1789. Because the child was baptized by the midwife (most likely Maria Anna Koudelka), there is no entry in the baptismal records of the parish Am Hof. In the entry in the municipal death records (which I published in my article "A Child named Christian Mozart") Mozart is given as "Mozart Wohledler H:[err] Wolfgang" (A-Wsa, Totenbeschreibamt 92, lit. M, fol. 48v):

The word "wohledler" (truly noble) was generally used to address individuals of noble birth. Mozart is also addressed as "Herr Wolfgang von[!] Mozart K. / K. Käpelmeister" in the entry in the death register of the parish Am Hof which I also published in the aforesaid post. 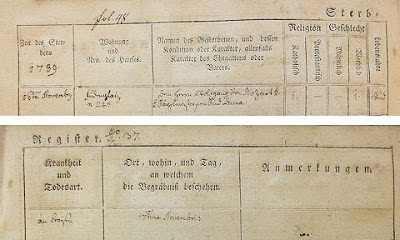 The entry in the Bahrleihbuch (the register of burial fees) of St. Stephen's concerning Anna Mozart's burial on 17 November 1789 was first published on 8 June 2009 in my article about Mozart's apartment on the Alsergrund which in 2010 also appeared in print in the Newsletter of the Mozart Society of America, Vol. XIV, No. 2). In this document Mozart is again addressed as "imperial and royal capellmeister Wolfgang von Mozart". 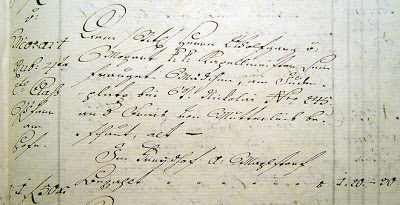 Mozart, 4th category, 2nd class, parish Am Hof, the girl baptized in emergency of Herr Wolfgang von Mozart, imperial and royal capellmeister, at the Judenplatz at St. Nicholas No. 245 was inspected [having died] of spasms after her birth. In the cemetery beyond Matzleinsdorf, paid 1 f 20 x [the personnel] 30 x [the church] [overall sum] 1 Gulden 50 Kreuzer. (A-Wd, Bahrleihbuch 1789, fol. 377r)

Of course, there is no absolute proof that Mozart's nobility was universally acknowledged by his Viennese contemporaries. But the above documents make it very likely that at some time Mozart actually passed himself off as a nobleman.

In his article "Mozart: In und vor der Stadt" in the journal Wiener Geschichtsblätter (2/2012) Walther Brauneis plagiarized parts of my article "Mozart's Apartment on the Alsergrund" and presented a number of supposedly unknown Mozart sources that I had already published more than three years earlier. Among those sources were the documents presented above. Because Brauneis could not cope with the fact that in 2009 I had published within two weeks what was to take him several years, he staged a childish "revenge", taking advantage of the gross negligence of the Verein für Geschichte der Stadt Wien whose editor was not willing to invest ten minutes into reading my article. On the other hand, what else is to be expected from a historical society whose general secretary distinguished herself with the inane statement: "Who is interested in Mozart anyway?"

In 2013 Brauneis repeated his theft of intellectual property by republishing his article in "In Signo Wolfgang Amadé Mozart", the journal of the Mozart-Gesellschaft Zürich, whose board members did not realize the scam.