The Mozarteum recently issued a press release regarding "sensational discoveries" in Mozart portraiture which contains statements that are likely to mislead the public. 1) The "Boy with the Bird's Nest" (attributed to Zoffany) "does not show Mozart and is a fake". As a matter of fact that this painting does not show Mozart had been known to art historians for ages. The painting is not a fake, but a misattribution by greedy sellers and/or wishful "experts" who already existed at the Mozarteum back in 1925. 2) "The Unfinished Lange portrait had been already finished before it was enlarged which has been proven by X-ray analysis". This fact was already uncovered by me back in March 2009 without any X-ray and the recent analysis was only carried out after I had suggested this procedure to Dr. Ramsauer in June 2010. 3) "The miniature on ivory on a tobacco box definitely shows Mozart" (quote: "Nun ist es sicher"). As a matter of fact this miniature (Mozart-Museum Salzburg, Inv. Nr. 90/47) has already been identified as genuine Mozart portrait five years ago by the historian (and retired head of the Munich City Archive) Dr. Richard Bauer in his excellent book "Das rekonstruierte Antlitz" (Neustadt an der Aisch: 2008, pp. 6-11). Revaluating the sources (among others Constanze Mozart's letter to Breitkopf & Härtel from 21 July 1800 and the 1829 engraving by Christian Benjamin Gottschick) Bauer came to the conclusion that the portrait "is an en-face-portrait of Mozart dating from the mid 1780s". However (and in my opinion quite correctly) Bauer doubts the attribution to Joseph Mathias Grassi (hilariously misnamed "Joseph Maria Grassi" by the Mozarteum staffer Dr. Christoph Großpietsch), because Grassi, who was personally acquainted with Mozart, would not have written "Joh: Mozart" on the back of the painting and the execution of the portrait is starkly at odds with Grassi's elegant style. Furthermore the attribution to Grassi is only based on a very dubious 1792 engraving, listed among Mozart portraits by Constant von Wurzbach in 1868 (32. "J. v. Grassi p. 1785, Gottschick sc. 1792") that has never been verified. (Gottschick would have been 16 years of age in 1792). It is to be hoped that Bauer's 2008 identification and my 2009 discovery will be referred to by the Mozarteum in the catalogue of its upcoming exhibition. 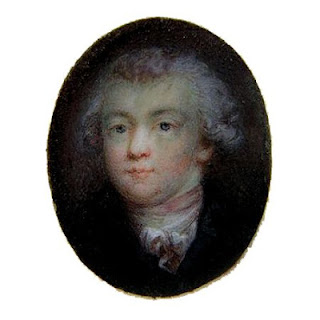