The probate file of Mozart's estate, the so-called Sperrs=Relation, drawn up by the civil court of the Vienna Magistrate right after the composer's death, is one of the most important of all Mozart documents. It gives an exact list of the close relatives of the deceased, his possessions and assets, together with his debts and receivables. It was legally obligatory to draw up the belongings of a deceased person to be able to put it under restraint (Sperr) to forstall any possible missappropriation of the estate. Every Sperrs=Relation had a two-folio cover sheet (the so-called Mantelbogen) with preprinted standard paragraphs that had to be filled out by the official of the court (the so-called Sperrskommissär). The first page of Mozart's probate file (A-Wsa, HA, Persönlichkeiten M14.1) looks as follows:


In 1961 Otto Erich Deutsch published his book Mozart. Die Dokumente seines Lebens, a voluminous 600-page collection of Mozart documents. The publication of this fundamental work was not just Deutsch's personal enterprise. The biggest collection of Mozart documents so far was published as Supplement, Werkgruppe 34 of Serie X of the "New Mozart Edition", i.e. a part of the project Mozart. Neue Ausgabe sämtlicher Werke. Thus, on one of its title pages this book bears the following quality seal: "En coopération avec le Conseil international de la Musique. Editionsleitung: Wolfgang Plath Wolfgang Rehm". When we look at Deutsch's transcription of Mozart's probate file, however (and this is only one of countless examples in this collection), it soon becomes obvious that something is deeply amiss. Not only does Deutsch's edition not meet the basic standards of scholarship, because it fails to provide a description of the formal structure of the source and a usable shelf mark; we also realize that Deutsch was completely unfamiliar with the official terms in an eighteenth-century document of a Viennese court of law. His knowledge of the German vocabulary in legal documents of this kind was insufficient and his expertise in Latin and the frequently applied abbreviations of terms in this language was basically non-existent. Since Deutsch's transcription of the text on the cover sheet of the Sperrs=Relation alone contains about 25 mistakes, it is obvious that he never even saw the original document and blindly relied on the work of two archivists of the Vienna Municipal Archives, namely Rudolf Geyer and Hanns Jäger-Sunstenau, to whom he gives credit in a footnote "for their help with the transcription". Deutsch's aversion to all research for which he actually had to leave his apartment is legendary. In the course of his Mozart and Schubert research, he demonstrably never visited a Viennese parish archive. Deutsch either ignores the abbreviation "mpia" (for manu propria) altogether, or mistranscribes it as "Mag.", and he actually mistakes the small title page of the twice-folded Mantelbogen on fol. 4v for a rubrum. Page two of Mozart's probate file contains the following preprinted paragraphs that were filled out by the Sperrskommissär.


Deutsch's transcription of the above text concerning Mozart's two minor children – note that Franz Xaver was already called "Wolfgang" as an infant – and the existence of a will or a comparable legal document (like a marriage contract) is a fine example of one of his countless palaeographical failures. Deutsch begins the transcription of the first handwritten passage as follows: "2[!] Bübl:[sic]  als: Karl 7. Jahr". The word "Bübl" (boys), which was never used by a Sperrskommissär, is of course complete nonsense. The entry reads "Leibl:[iche]" (legitimate [children]). The next entry is garbled by Deutsch in the following way: "Keines,[!] doch ein Heuraths Brief Act = 3 = Aug: 782." This is a true highpoint of ignorance. One could accept the missing semicolon, but any serious scholar, who has ever worked with eighteenth-century Viennese administrative documents, can recognize and transcribe the abbreviation "dd°" (with the small superscript "o" being doubly underlined) which means de dato (i.e. dating from). And the second one of Deutsch's absurd double dashes is simply the double underscore of the superscript abbreviation "t[er]", belonging to the "3" which is the date of Mozart's marriage contract. Mistakes of such grotesque scale in a volume of the Neue Mozart-Ausgabe, which is supposed to represent a final and authoritative edition of the sources, are simply breathtaking. And the situation becomes even more absurd, given the fact that this document had been published several times in a much less flawed (and "Bübl"-less) version, decades before Deutsch dealt with it. Arthur Schurig published part of the Sperrs=Relation in his book Constanze Mozart: Briefe, Aufzeichnungen, Dokumente 1782 bis 1842, (Dresden 1922), and published it a second time in the 2nd edition of his book Wolfgang Amadeus Mozart. Sein Leben, seine Persönlichkeit, sein Werk, (Leipzig 1923). Albert Leitzmann also published much less flawed excerpts from this document in his collection Wolfgang Amadeus Mozart. Berichte der Zeitgenossen und Briefe, (Leipzig 1926). The funniest detail is that Deutsch was fully aware of these earlier publications. He refers to them in his commentary at the end of his own transcription where he proudly points out that "contrary to all the earlier editions this one is complete" – which of course it is not.

The story does not end here. For several years now, the Salzburg Mozarteum has been working on a project titled "Briefe und Aufzeichnungen zu W. A. Mozart und seiner Familie aus den Beständen der Stiftung Mozarteum Salzburg". The goal of this project, which is being funded by the Packard Humanities Institute, Los Altos/California, is the online publication of all letters and documents related to the Mozart family, as well as related letters and documents spanning from 1740 (when Leopold Mozart arrived in Salzburg) to 1881 (when the International Mozarteum Foundation was established). The list of hitherto published documents provides a fascinating glimps into the blissfully complacent world of the Mozarteum. The online publication of the documents is marred by several problems and a literal ocean of mistranscriptions awaits the interested reader. Many of these hidden howlers are true gems and the fun they provide almost lets one forget that this kind of dilettantism is draining huge amounts of money away from scholarship that could  put generous funding to a much better use. Note, for instance, the poor "Frau Schupfer", appearing in this document, who was recklessly turned into a "Frau Söhupfer", because none of the people in charge know how a small "c" is written in Kurrentschrift.

Frau Schupfer, turned into "Frau Söhupfer", in the transcription of anonymous notes from after 1836 concerning Salzburg citizens who could possibly own Mozart autographs (Internationale Stiftung Mozarteum, Bibliotheca Mozartiana)

The transcriptions that are shown beside the pictures apply a ridiculously unpractical set of "Kürzel" signs (the Mozarteum calls them "Abbreviatur-Schleifen") instead of bracketed completions of the words which sometimes turn the reading of these transcriptions (such as Mozart's letter of 27 March 1770 from Bologna) into a mind-boggling experience. The fact that some transcriptions contain the term "unleserlich" (illegible) is all the more frustrating, considering the small size and the weak resolution of the pictures that make it impossible for the reader to decipher the document on his own.

On 7 December 1787, Joseph II appointed Mozart k.k. Kammermusikus. The decree signed by Johann Thorwart (who in 1782 had been Constanze Weber's witness at her wedding) looks as follows. 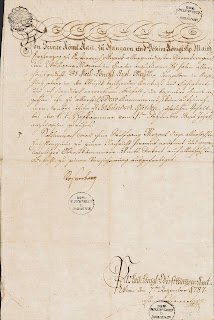 What kind of transcription of this document does David Woodley Packard get for his money? It turns out that the text of this decree, as presented on the Mozarteum website, is neither new nor is it flawless. The money was new and flawless alright, but the transcription is an exact copy right out of Deutsch's flawed 1961 edition of the Mozart-Dokumente. All the typical symptoms of Deutschian perplexity are still there: the Mozarteum's transcriber (or rather copyist) does not resolve the abbreviations (not even in the print version). Just like Deutsch, he still mistakes the "p." at the end of the headline for an "etc.", and the meaning of "Pr." at the beginning of the closing formula is still a mystery. Needless to say that this document has already been published several times by Jahn, Schurig, Tenschert and Mueller von Asow. Sometimes even in better readings.

Posted by Michael Lorenz at 3:31 AM