"The Newly Discovered Mozart Portrait": Back to Reality

On 11 January 2013 the Mozarteum in Salzburg published a press release that contained the following page: 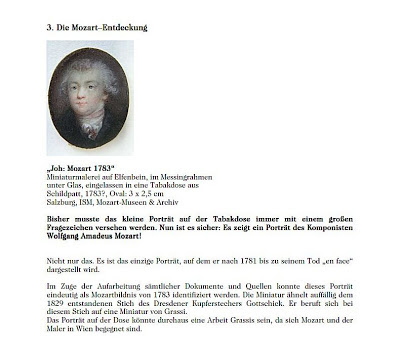 The gist of this announcement is as follows:

The Mozart Discovery. Hitherto the small portrait on a tobacco box came with a huge question mark. Now it is certain: it shows a portrait if the composer Wolfgang Amadeus Mozart! In the course of a thorough study of all the documents and sources this portrait could definitely be identified as a Mozart portrait from 1783. The miniature shows a striking resemblance to the 1829 engraving by the Dresden engraver Gottschick, wh with this engraving refers to a miniature by Grassi. The portrait on the box could well be a work by Grassi, because Mozart and the painter met each other in Vienna.

Here is the page in the book about the exhibition that deals with the supposed Mozart miniature: 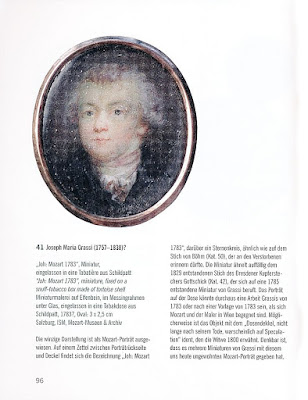 What we read here, quickly takes us down from the spheres of "sensationally new discoveries" to the low grounds of only too well-known dull speculation. The "certainty" that the press release has been bragging about is gone and the shadow of "we don't really know anything for sure" is lying heavily on the the portrait's supposed authenticity:

Joseph Maria[sic] Grassi (1757-1838)?[sic] [...] The miniature shows a striking resemblance to the 1829 engraving by the Dresden engraver Gottschick who refers to a 1785 miniature by Grassi. The portrait on the box could[sic] well be a 1783 work by Grassi or done from a 1783 model, when Mozart and the painter met each other in Vienna. Possibly[sic] the object is identical with the "box lid that was done not long after his death, probably based on speculation" as the widow [Constanze Mozart] put it in 1800. It is conceivable[sic] that there were several Grassi miniatures of this portrait which looks unfamiliar to us today.

Thus, the whole "sensation" simply boils down to the following points:

The articles in the book published by the Mozarteum are classic examples of the deep lack of logical thinking among scholars, who seem to be dazed by the "Salzburg Mozart Bubble" when it comes to logic and a clear methodology in defining *authenticity* in historical portraiture. I will deal with fundamental issues regarding the authenticity of Mozart portraits in an upcoming review of the exhibition book on this blog.

In the course of a desperate publicity campaign the Mozarteum took advantage of a journalist's naivete and launched an article in today's New York Times, titled "Wolfgang, Is That You?". In this strangely superficial piece of "popular science" we are being confronted again with the usual mixture of factoids and unsubstantiated conclusions. According to the article in the NYT, "a rummage through the archives found a document showing the object’s provenance". Quote:

The document said Mozart had owned the snuffbox for 10 years and gave it as a gift to Anton Grassi, a sculptor friend in Vienna. Letters from Mozart indicate that Grassi’s brother Joseph, also an artist, painted a miniature of Mozart. Joseph acquired the snuffbox from his brother and attached the miniature, Ms. Ramsauer said.

This mysterious "document" (which could not be located by the Mozarteum experts in the course of the yearslong preparation of their current exhibition) is still unpublished. Since (as stated by Dr. Großpietsch) "Mozart owned several tobacco boxes", its provable[!] connection to the box in question remains doubtful. There is no proof at all that Anton Mathias Grassi (b. 26 June 1755 Vienna, d. 31 December 1807 Vienna) was a "sculptor friend" of Mozart's (as a matter of fact he was a model sculptor at the Imperial Vienna Porcelain Manufactory). To establish a close connection between Anton Grassi and Mozart is an even bigger stretch than the inflation of Joseph Grassi's dancing activities in 1783 into an intimate friendship with the composer. The claim that "Letters[!] from Mozart indicate that Grassi’s brother Joseph, also an artist, painted a miniature of Mozart" is a false and ruthlessly dishonest statement. Grassi does not appear in "letters", but only in one of Mozart's letters to his father on 12 March 1783, where Mozart only reports that "a[sic!] painter (graßi)" appeared as Dottore in a pantomime at a masquerade ball. Any similarity to scholarship is purely coincidental. There is no proof that Grassi ever painted a portrait of Mozart. There is no proof that "Joseph acquired the snuffbox from his brother" or that "he attached the miniature". These claims are all based on reckless speculation. To quote from the NY Times:

One of the most famous portraits — and the one Mozart’s wife, Constanze, considered the most true to life — has long been considered unfinished. It is by Joseph Lange, Mozart’s brother-in-law, and shows him in profile, looking down, his face emerging from a dark background, with a triangle of torso surrounded by scratched white space. The painting, dating from 1789, without doubt looks unfinished, like a classical symphony of two movements.

Fact of the matter is that there is no proof at all that this painting dates from 1789 (contrary to Großpietsch's claim Franz Segl's 1856 photograph proves absolutely nothing). This dating is based on a mere assumption. No research on Lange's oeuvre and the development of his artistic style has ever been undertaken by the Mozarteum. Quote:

X-ray and infrared analysis performed at the Doerner Institute in Munich, an art research institution, last December showed that a small completed painting of Mozart’s head and shoulder had been trimmed and mounted at some point on a larger canvas, with paint added around the edges to smooth out the surface. The enlargement was unfinished, not the original.

This paragraph offers no new information at all. It just repeats my 2009 discovery which I published on 19 September 2012 under the title "Joseph Lange's Mozart Portrait" on this blog. When I told Ms. Ramsauer about my discovery in June 2010, I learnt with astonishment that the thought of submitting the painting to X-ray and infrared analysis had never occurred to the Mozarteum curators. Only after my suggestion did they undertake said analysis, leading to the "sensational" results about which the Mozarteum is now bragging. Of course I do not quarrel with the fact that with this media announcement regarding the Lange portrait the staff of the Mozarteum is now claiming a priority that is not really theirs. There are so many colleagues who witnessed my discovery back in 2009 that today I can actually lean back and watch the ongoing (and partly embarrassing) events with great amusement. I am proud of my pioneering vision that needed no X-ray analysis to discover the truth about Lange's Mozart portrait already four years ago.


The document that according to the 2013 article in the New York Times, "said Mozart had owned the snuffbox for ten years and gave it as a gift to Anton Grassi, a sculptor friend in Vienna" has still not been published by the Mozarteum.

Posted by Michael Lorenz at 4:26 PM