In 1787 Da Ponte is at the peak of his librettist career. And yet he is going to rise and take an even more important role in the world of theater. But before we reach that point in the exhibition, let us interject a question: Where did Da Ponte actually live in Vienna? Contrary to Mozart, whose letters tell us about his numerous addresses during his Viennese years, and different from Da Ponte in New York, where he is documented as established businessman or teacher in many address books, none of the librettist's addresses in Vienna could so far be identified. 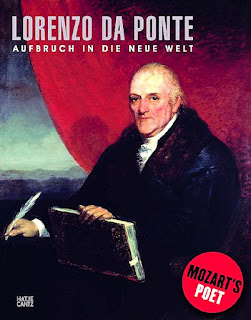 Two of Da Ponte's addresses in Vienna can very roughly be located based on the information given in two passages of his memoirs to which Hanak duly refers in his article. After his arrival in Vienna, Da Ponte seems to have lived in the inner city which turned out to be too expensive for him:

Instead of keeping my apartment in the city, which cost me very dearly, I took a small chamber in the house of a tailor in the suburb of Wieden.

A clip from the 1829 edition of Da Ponte's Memorie describing his move to the sobborgo di Vidden.

In a later passage in his memoirs Da Ponte describes how he dreamed that he ran into Casanova on the Graben, one of the streets of Vienna where he lived at that time ("una cioè delle strade di Vienna, dove io allora abitava"). And at some time before February 1785 (at which time Casanova left Vienna), Da Ponte's dream came true:

Salieri, who used to visit me every day, arrived at the usual hour to take me for a walk in a public garden. When I arrived at the Graben I noticed an old man in some distance, who was watching me attentively and didn't seem unfamiliar to me. Suddenly I saw him leaving his spot, he approached me, embraced me with great vivacity and exclaimed: "Da Ponte, dear Da Ponte, what joy to find you here!" And those were the very same words that he had said to me in my dream. 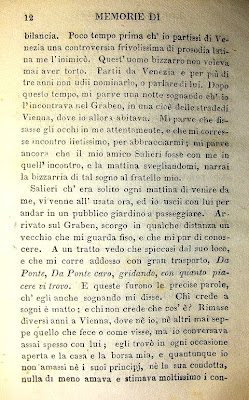 In September 2011, in the course of a complete reading of the 1787/88 Josephinische Steuerfassion, I was able to locate Da Ponte's name in these tax records (an inventory of all Viennese houses subjected to taxation, their main tenants and their leasing rates). It turns out that in 1788 Lorenzo Da Ponte lived in the "Heiligengeist Haus" ("Holy Ghost House") No. 316, at the upper end of the Tiefer Graben, opposite the the so-called Heidenschuß, between the squares Am Hof and Freyung. There, for an annual rent of 200 Gulden, Da Ponte lived in an apartment on the fourth floor that consisted of three rooms, a kitchen and a firewood vault.

Unfortunately the bishopric's general ledger preserved in Vienna's Diözesanarchiv does not list the individual tenants and only gives a general summary of the house's annual rental yield (amounting to 3,431 fl in 1788/89). The name "Holy Ghost House" originated from a hospital foundation of the Order of the Holy Ghost which was established in Vienna on 27 May 1211 by Duke Leopold VI and his personal physician. The Holy Ghost Hospital proper, which was located on the Wieden, ran into hard times and was eventually destroyed by the Turks in 1529 during the Siege of Vienna. The last head of the Viennese branch of the Holy Ghost foundation, Dr. Jacob Nagl, went to great efforts to at least preserve the two houses in the city at the corner of Tiefer Graben and Heidenschuß for the foundation. For financial reasons the foundation had to be disbanded eventually and in 1579 the two houses were taken over by the bishop Johann Caspar Neubeck for the bishopric of Vienna. The two old small houses were torn down in 1639 and, for reasons of maximization of rental yield, replaced with one six-storeyed house whose broadsides faced the Heidenschuß and the Tiefer Graben. The entrance of the house was located on the southwest side and was decorated with a huge stone coat of arms of the house's builder Philipp Friedrich Count Breuner, similar to the one that today is on display near the main altar of St. Stephen's Cathedral. 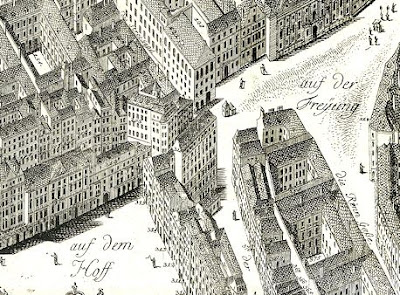 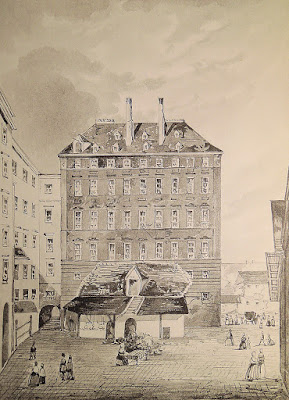 The "Holy Ghost House" seen from the Tiefer Graben. The entrance was located on the other side towards the Heidenschuß. In the foreground is a so-called Fleischbank, a cold storage house for meat (anonymous watercolor).

An especially nice view of the house appears on Bernardo Bellotto's 1761 painting "View of the Freyung": 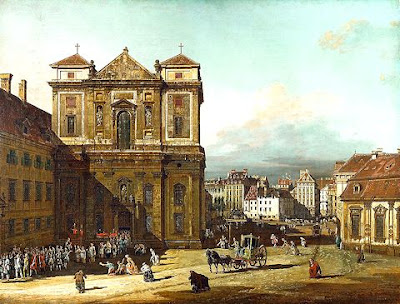 Bernardo Bellotto: View of the Freyung from the northwest 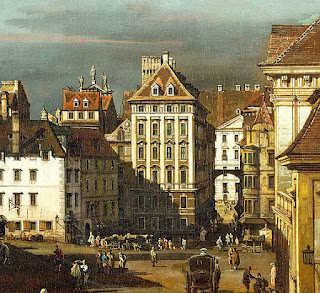 Around the middle of the nineteenth century Franz Gerasch (1826-1906) painted a historistic view of the Freyung that also shows the "Heiligengeisthaus". It may have been inspired by Bellotto's painting. 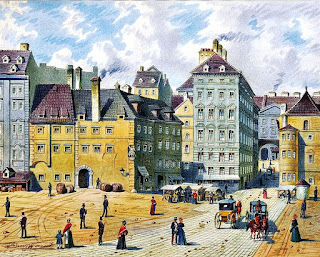 
The most intriguing implication of Da Ponte's address is the fact that by living in the "Holy Ghost House" L'Abbe Da Ponte was a tenant of Vienna's archbishop Christoph Anton Cardinal Migazzi (1714-1803). Da Ponte is not the only person of musical interest connected with this house: at the time of his marriage in 1775, Antonio Salieri had been living there for several years and it seems possible that he later recommended this particular residence to his friend Da Ponte. 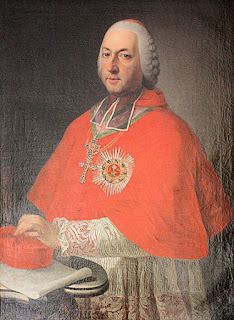 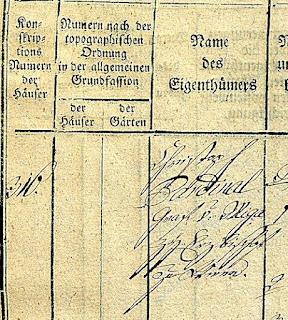 
Who else lived at Stadt 316 in 1788? The first floor (in Vienna "Zu ebener Erde") housed a janitor's room, four butcheries, a wine tavern run by the bishopric and six Auslaggewölbe (shops). Among them Anton Angermayer's cheese dairy, Johann Michael Geiblinger's Greißlerei (a general store), and the butcheries of Nikolaus Paulus and Joseph Tscherny. The largest and most expensive apartment in the house (nine rooms on the third floor below Da Ponte) was let to the Tridentine capitular Count Wilhelm Triangi von und zu Latsch und Madernburg. The tenant who shared the fourth floor with Da Ponte was possibly Anton Brandt (1752-1822), the official of the Hungarian Court Chancellery, whose name appears in Matthias Raby von Raba und Mura's 1797 book Justizmord und Regierungsgreuel. The fifth floor was leased to the wigmaker Paul Prem (the future father-in-law of the the clarinetist Joseph Bähr) and the Tyrolian Schwertfeger (swordsmith) Alois Walcher. On the highest floors lived Leopold Peidinger, the widow Ursula Kernhofer and the tailor Joachim Ruckhart, who had moved into the "Heiligengeist Haus" in 1769 after his marriage to Elisabeth Drescher, the daughter of a tailor who had also lived there. Of course the house was also inhabited by countless subtenants whose names do not appear in the tax records.

It is not possible to determine when Da Ponte moved into the "Heiligengeist Haus" and whether he already moved out before going to Trieste in June 1791. Regarding Da Ponte's collaboration with Mozart it is important to note that the residence at the Heidenschuß was situated relatively close to Mozart's apartment on the Alsergrund where the composer lived at the very same time. This proximity may have been relevant in course of the preparation of the Vienna premiere of Don Giovanni on 7 May 1788. Mozart's next residence in the house "Zum Nikolaus" at Judenplatz 245 was also located relatively close to the Heidenschuß where Da Ponte may still have lived in 1789, when he and Mozart began working on Così fan tutte.

In 1855 the bishopric sold the "Heiligengeist Haus" (by then No. 236) to the newly founded k.k. privilegierte Österreichische Creditanstalt which tore it down to make way for its new headquarters (to be destroyed during WWII). Most of the floor area of the historic building is located today on the street in front of Heidenschuss 2. 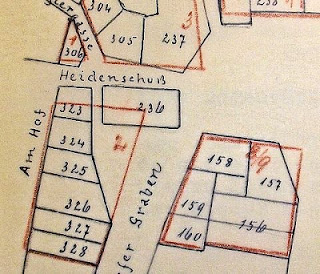 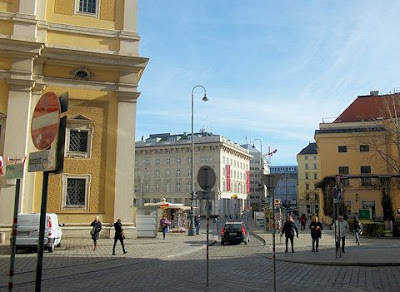 The Freyung from the northwest in 2013. The Schottenkirche is on the left.

This discovery was first published on 26 September 2011 in an amended footnote of my article "Mozart's Apartment on the Alsergrund" and again on 2 July 2012 in Wikipedia's Da Ponte article.

Posted by Michael Lorenz at 5:26 PM