Mozart's first daughter Theresia Konstanzia was born on 27 December 1787 in the house Stadt 281, "Zum Mohren" ("At the Sign of the Moor", today Tuchlauben 27, today's building dating from 1884). 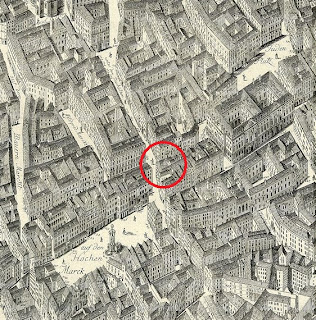 The entry concerning the baptism, published for the first time in 1919 by Emil Karl Blümml (and in 1961 referred to by O. E. Deutsch), is based on the following document in the registers of the parish of St. Peter's Church in Vienna.

Apart from publishing this entry with a wrong number (198 instead of 195), with several mistakes, and without the name of the officiating priest Joseph Petz (which is given on the far right), Blümml was also unaware of the fact that the document he copied was nothing but a later fair copy of the original 1787 entry. Only a few of the old original baptismal registers of St. Peter's survive. Mozart scholarship was unaware of their existence, until on 24 August 2006, I realized their significance and published the original entry concerning Theresia Mozart's baptism for the first time in my article "Mozart's Apartment on the Alsergrund" on 8 June 2009. Contrary to Blümml's and Deutsch's assumption, the original document shows that Theresia Mozart was not baptized at St. Peter's Church, but in the apartment of her parents on the Tuchlauben.


The note regarding the baptism at home "against the regulation" shows that the minister generally opposed this procedure, because the alleged weakness of the child often served the only purpose of sparing the midwife and the godparent the walk to the church. The signature of the godmother Theresia von Trattner (1758–1793, herself a goddaughter of Maria Theresia) in the original entry is not autograph which is proved by her signature on the occasion of Elisabeth Mansfeld's baptism on 10 August 1784 in the records of the Piarist church of Maria Treu (Maria Treu, Tom. 5, fol. 142).

172 years after the foundation of the Mozarteum, which (among other objectives) was established "to collect Mozart documents", there are still many pivotal Mozart documents in Vienna's archives that so far have escaped the attention of researchers who are confined to a desk.

In his article "Mozart: In und vor der Stadt" in the journal Wiener Geschichtsblätter (2/2012) the Viennese amateur historian Walther Brauneis plagiarized my discovery of Theresia Mozart's original baptismal entry by simply copying everything from my article and from the pictures of the entry that I had published online in 2009. Brauneis gave himself away by shortening the shelfmark "A-Wstm, St. Peter, Taufbuch (original copy), Tom. 2, fol. 123" in footnote 8 of my article into the revealingly false "Taufbuch Pfarre St. Peter, Bd. 2, fol. 123". This incomplete (and therefore wrong) shelfmark refers to a completely different and much later "Band 2" of the baptismal records in question. In the course of his copying Brauneis did not understand what the words "original copy" in the footnote of my article meant. Because he had never actually seen the books in the parish archive, he did not know that there are two series of early baptismal records of St. Peter's: the original books (which had been ignored prior to my research and to which I referred with the words "original copy") and the later copies of these books with volume two beginning but in January 1804.

Posted by Michael Lorenz at 1:31 AM