Mozart's first child Raimund Leopold died on 19 August 1783 in the house Oberneustift No. 250 while his parents were still in Salzburg.

The entry in ther municipal death register concerning the death of Raimund Leopold Mozart on 19 August1784´3 (A-Wsa, Totenbeschreibamt 82, M, fol. 30r). This entry was first published (without the coroner's name) by Emil Karl Blümml in the Mozarteums-Mitteilungen I. 3 (Salzburg 1919). The name Mozart is written in Latin script, because Johann Michael Ankherl, the scribe of the Totenbeschreibamt, did not consider it a German name.

This entry reads as follows:

Herr N. Mozart, musician, his child Raimund, aged 9 weeks, was inspected at the Red Peacock, No. 250 in Ober Neustift, [as having died] from intestinal spasms.       L. Z.

The entry in the records of the parish church of St. Ulrich concerning the child's burial on 21 August 1783 looks as follows.

The entry concerning the burial of Raimund Leopold Mozart on 21 August 1783 in the cemetery of St. Ulrich (St. Ulrich, Tom. 23, fol. 83r). It is not clear when exactly Mozart's first name was added. This entry was also published by Blümml in 1919, abeit not completely correct.

On the same day [21 August]
Herr N. Wolfgang v Mozart, musician, his child Reymund, died at the Red Peacock in Ober Neustift, aged 9 weeks.
[and was buried in the] village [cemetery for a fee of] 30 kreuzer

If we want to find out where exactly the house Oberneustift No. 250, "Zum rothen Pfauen" ("The Red Peacock") was located, we are faced with a number of choices in the Mozart literature. On p. 193 of his 1961 edition of the Dokumente Otto Erich Deutsch presents us with the address "heute VII. Lerchenfeldstr. 65". This is doubly false, because a) the correct name of this street is Lerchenfelderstraße, and b) in 1783 this house was not built yet. In 1783 the area south of the Rofranogasse, (today Lerchenfelderstraße) in the district, which  in the 1790s was to become Neubau (i.e. "new buildings"), was still a field. On p. 222 of his 2004 book Mozarts Reisen in Europa 1762-1791 Rudolph Angermüller writes: "[...] in der Vorstadt Ober-Neustift Nr. 250, heute: Wien VII. Neustiftgasse 104". This address, which Heinz Schöny copied in his genealogical article in the catalog of the 1991 Zaubertöne exhibition, is wrong as well, because this house also did not exist yet in 1783. It was built between 1786 and 1788 in the Stadelgasse in Oberneustift and was later named "Zum schönen Ungar" ("At the Handsome Hungarian"). But there is hope, because the correct address has been published 88 years ago. On p. 84 of his 1925 book Neubau Ein Heimatbuch des 7. Wiener Gemeindebezirkes the great Viennese amateur historian Hans Rotter (1868-1945) published the following information:

It is quite intriguing to figure out the origin of Deutsch's and Angermüller's wrong addresses. In general (with a number of exceptions) Viennese houses had three different Konskriptionsnummern which were assigned in three numberings in 1770, 1795 and 1821. But the numberings of houses in certain Viennese suburbs show puzzling irregularities and the district of Oberneustift is such a case. Because in the early 18th century parts of Oberneustift were merged into the districts of Schottenfeld and Neubau, O. E. Deutsch chose the house in Schottenfeld which in 1795 bore No. 250 (i.e. Lerchenfelderstraße 65). Following a similar logic, Angermüller picked the house that in 1795 was Neubau No. 250 (i.e. Neustiftgasse 104). Both Deutsch and Angermüller were unaware of the fact that some houses in Oberneustift were already renumbered before 1795. Between 1786 and 1788, the house Oberneustift No. 250, "Zum roten Pfau" (in the street which at that time was named "Penzingergasse") was assigned the new number 120. 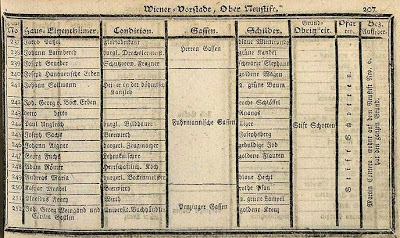 In 1786 Kaspar Mendel's house in the Penzingergasse still bore No. 250. 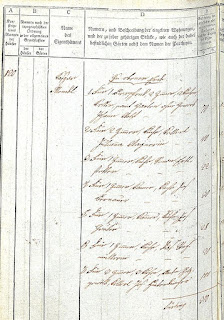 The house No. 120 in the 1787/88 tax register, already bearing the number 120. Here we see that the inn on the ground floor was run by a certain Johann Wolf. 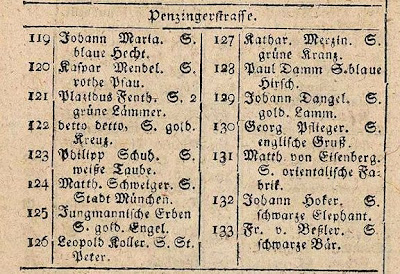 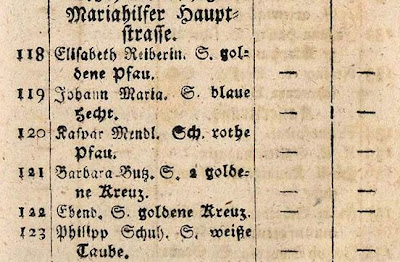 By 1798 the Penzingergasse has been renamed "Mariahilfer Hauptstrasse". Kaspar Mendel's house is still No. 120. 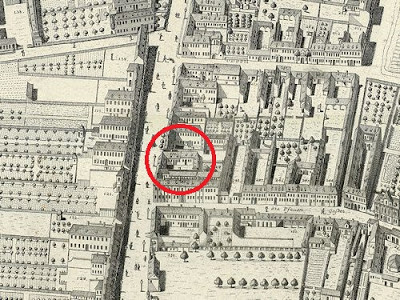 In his 1919 article "Mozarts Kinder" (which he republished in 1923 in his book Aus Mozarts Freundes und Familienkreis) Emil Karl Blümml wrote regarding Raimund Leopold Mozart's place of burial: "[...] dem Tage des Begräbnisses, an dem der kleine Mozart im längst aufgelassenen Friedhof um die St. Ulrichskirche beigesetzt wurde." ("the day of the burial, on which the little Mozart was buried in the long-abandoned cemetery around the church of St. Ulrich"). Blümml's information is wrong. The property records of the Schottenstift show that there was no cemetery around St. Ulrich's church. The old cemetery of St. Ulrich was located uphill, one block south of the church in the area between Siebenstern-, Mondschein-, and Zollergasse. 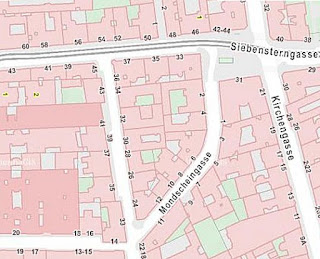 The quadrangle, south of the Siebensterngasse in the Viennese district of Neubau where from 1590 until 1784 the old cemetery of St. Ulrich was located. 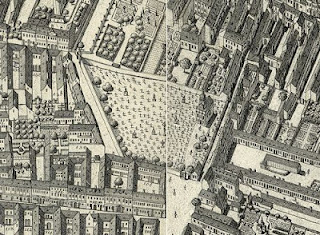 The same area, the graveyard of St. Ulrich on Huber's 1778 map. The triangular square at the bottom is the so-called "Holtz-Platzl" (today's Siebensternplatz).


Inside the cemetery there were four small chapels of which the biggest was consecrated to St. John of Nepomuk (the others were dedicated to Our Lady of Sorrows, The Shoulder Wound of Christ and The Holy Cross). Having the bell of the St. John's chapel rung on the occasion of a funeral cost 1 fl 30 x extra. After the cemetery had been closed in late 1784, this chapel for a short time was used as a stable. 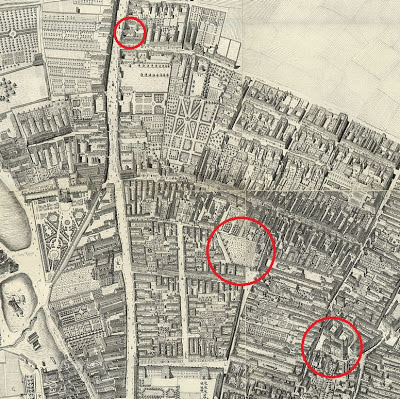 An overview of the three relevant sites as depicted on the 1778 Huber Vogelschauplan: on top is the house Oberneustift No. 250, in the center the cemetery and on the right the parish church of St. Ulrich. 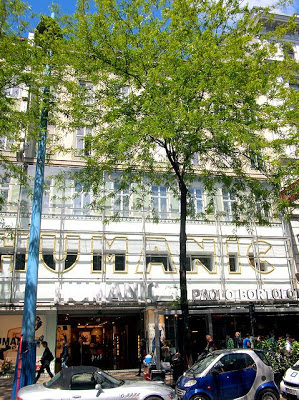 The "Rudolfshof", the former site of the house "Zum rothen Pfauen", at Mariahilfer Straße 94 today

Posted by Michael Lorenz at 3:12 PM