On 16 November 1789 Constanze Mozart gave birth to a child that was so weak that it only lived for one hour. If a newborn child was very weak or stillborn, it was the midwife's obligation to perform an immediate emergency baptism. In such cases the child was filed under the term "fraugetauft" (meaning "baptized by the woman"). If the newborn died soon after its birth, no official entry in the baptismal records of the parish was entered up and the child's name and the circumstances of its christening only appear in the records pertaining to the child's burial. In the 1789 death register of the municipal Totenbeschreibamt (A-Wsa, Totenbeschreibamt 92, M, fol. 48v) Mozart's fifth child is given with the rather curious first name "Kristian".

Sir Wolfgang Mozart, imperial and royal Kapellmeister, his child Kristian, baptized in emergency, at St. Nicholas No. 245 at the Judenplatz was inspected [as having died] of spasms right fter his birth. Matthäus Rauscher [coroner]

"Kristian" (or "Kristina") was a provisory name for a Christian (i.e. baptized) child which in eighteenth-century Vienna was used in cases of emergency baptisms, as long as the child's real first name was still unknown. When the above entry was made, the coroner of the Totenbeschreibamt did not know the name and the sex of the child yet and simply followed his instructions. Not surprisingly, the death of Mozart's child was not reported in the Wiener Zeitung. What follows are four examples of similar entries in eighteenth-century Vienna death records.

This short-lived Christian Stadler was a younger brother of the legendary clarinet players Anton and Johann Nepomuk Stadler. An example from the death records of the Vienna Schotten parish: 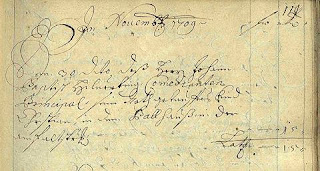 The father of this child Christian was the legendary puppeteer and actor Johann Baptist Hilverding, the father of the dancer Franz Anton Hilverding. Here is an example from the 1734 Totenbeschauprotokoll:

Francesco Alborea (b. 1691 in Naples, d. 20 July 1739 in Padua [not in Vienna, as given in every encyclopedia]) was one of the most important cello virtuosi of the eighteenth century. He is frequently confused with his son Francesco, the cellist known as "Franciscello". Here is another, final example from the 1776 records of St. Michael's concerning a female child named "Christina".

When on 17 November 1789 the burial of Mozart's daughter was reported and paid for at the Bahrleiheramt of St. Stephen's (the office that collected burial fees for the Vienna Magistrate), the child's name was still unknown. This resulted in the following entry in the 1789 Bahrleihbuch (which was published for the first time in June 2009 in my article "Mozart's Apartment on the Alsergrund"). 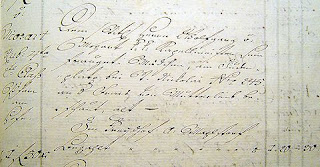 Mozart, 4th category, 2nd class, parish Am Hof, a girl baptized in emergency of Herr Wolfgang von Mozart, imperial and royal Kapellmeister, at Judenplatz at St. Nicholas No. 245, was inspected [as having died] of spasms after her birth. In the cemetery beyond Matzleinsdorf, paid 1 f 20 x [the personnel] 30 x [the church] [overall sum] 1 Gulden 50 Kreuzer. (A-Wd, Bahrleihbuch 1789, fol. 377r)

This is one of six documents I published in 2009 that show Mozart as being addressed with the appropriate particle of nobility "von". By now, the Bahrleiher already knew that the child was a girl, but the continuing uncertainty regarding the child's real name is reflected in the index of the particular volume of the payment records where the "fraugetauftes Mädchen" is given as "v:[on] Mozart Kristina".


We would not know the first name of Mozart's second daughter, if not one of its parents had told Johann Herbst, the priest of the parish church Am Hof, that the child's name was Anna. 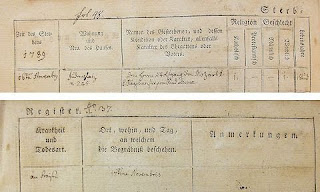 The first scholar who delved into the Viennese church records related to Mozart's children was the historian Emil Karl Blümml (1881-1925) who in 1919 published an article in the Mozarteums-Mitteilungen entitled "Mozarts Kinder Eine Matrikenstudie" (which in 1923 he published again in his pioneering book Aus Mozarts Freundes und Familienkreis). Commendable as Blümml's work was 94 years ago, his article does not meet present-day standards, because he overlooked several important sources and misunderstood some of the documents he dealt with. Blümml's flawed work became a problem only decades later, when in his 1961 edition of Mozart documents Otto Erich Deutsch decided to spare himself the effort of checking the Viennese church records in favor of a simple reference to Blümml's completely out-of-date article. Deutsch's intriguing aversion to ever step inside a Viennese parish office is one of many reasons why some Viennese Mozart sources remain unpublished to this very day. As far as the name "Kristian" Mozart in the death records was concerned, Blümml had no idea what it meant and showed himself slightly baffled.

While the entry in the parish register speaks of a girl, the official register of deaths of the City of Vienna for 16 November 1789 lists a boy. Which, then, of the two entries is correct? It should be mentioned that the name "Christian" is rare among Catholics.